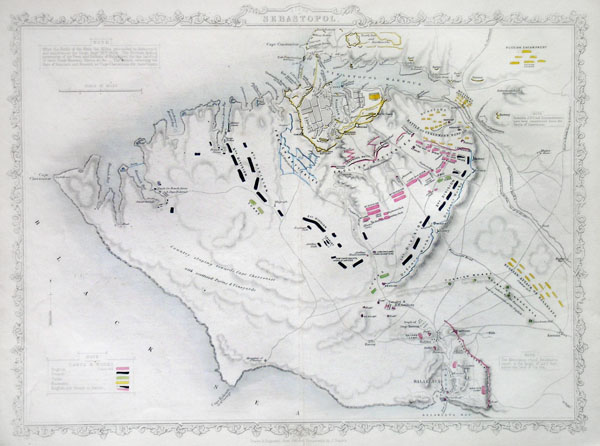 This hand colored map is a copper plate engraving of the city of Sebastopol, Russia. It depicts the city and areas surrounding Sebastopol & Balaklava (western Crimean Peninsula) in incredible detail. Sebastopol's place in history was cemented during the Crimean War. Seeking to punish Russia for its imperialistic designs on the Balkans Napoleon III and his allies, the English & Turks, invaded the peninsula, quickly taking Balaklava. The high point of the war was the legendary and disastrous 'Charge of the Light Brigade' wherein an entire British Calvary unit charged to its death against a fortified Russian position. This map was made by Tallis, a well known English cartographer known for his attention to detail and elaborate decorative borders.