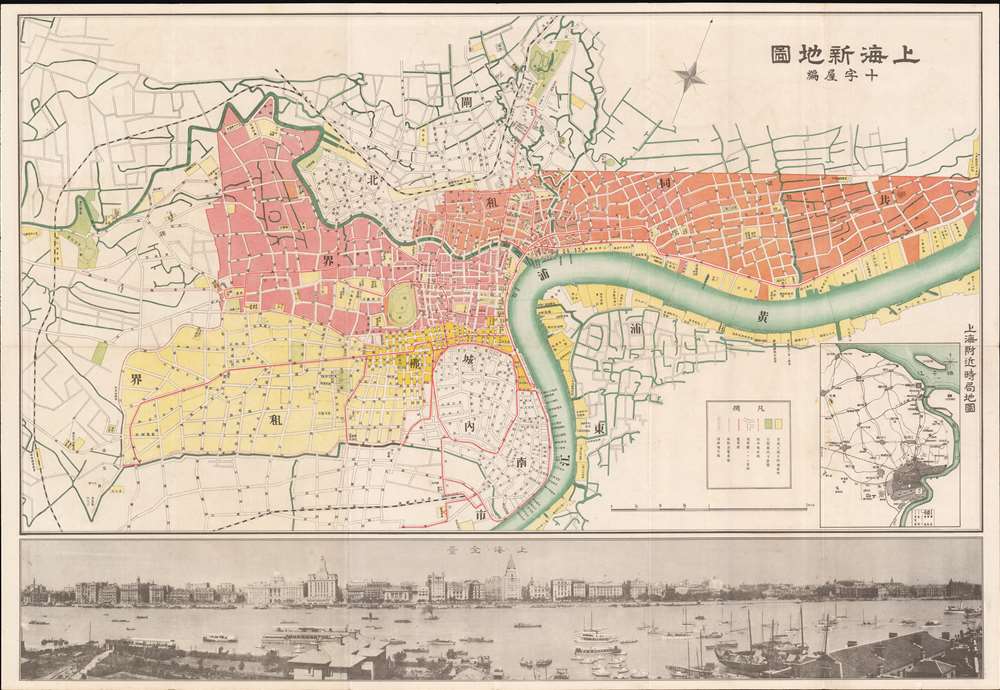 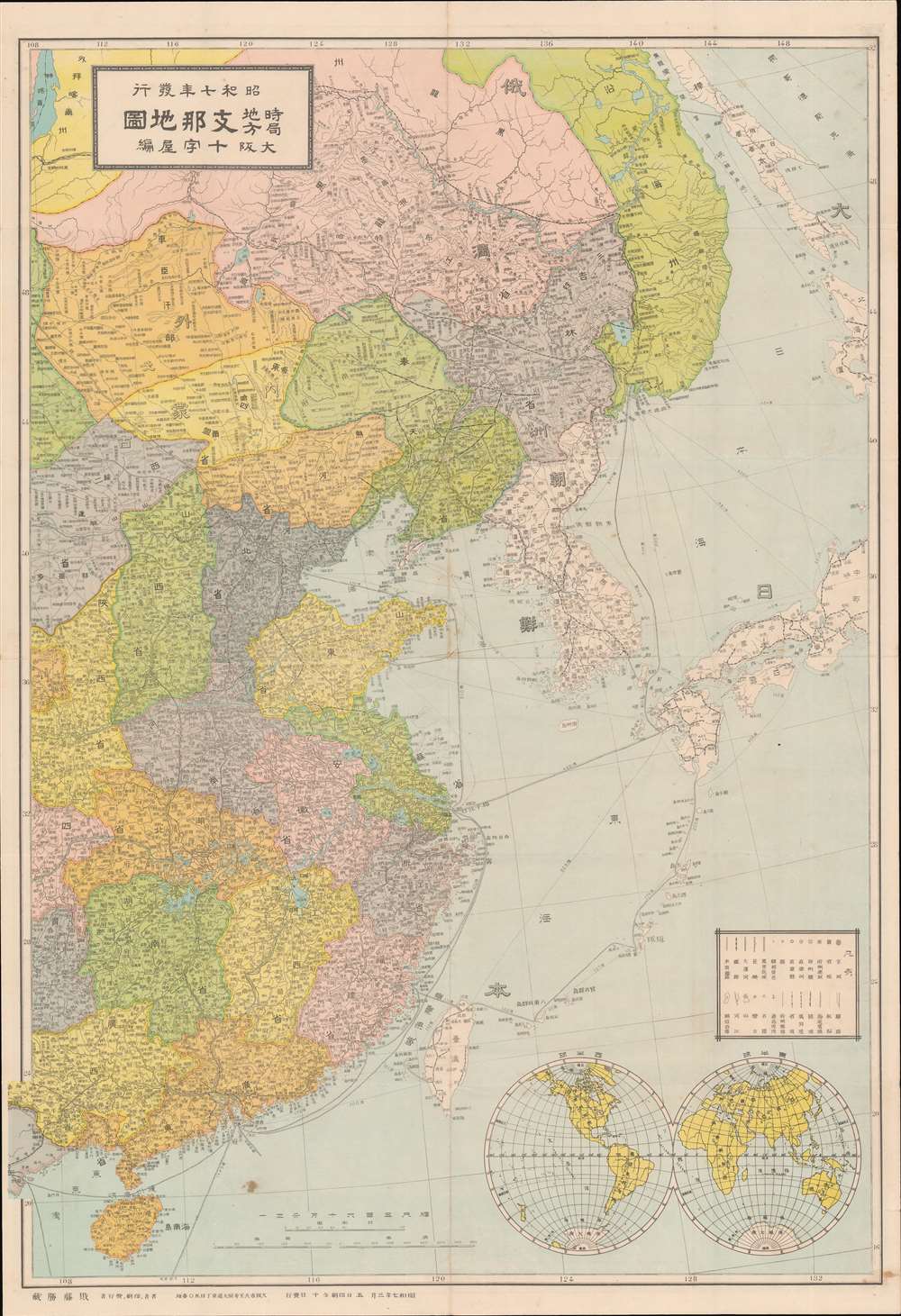 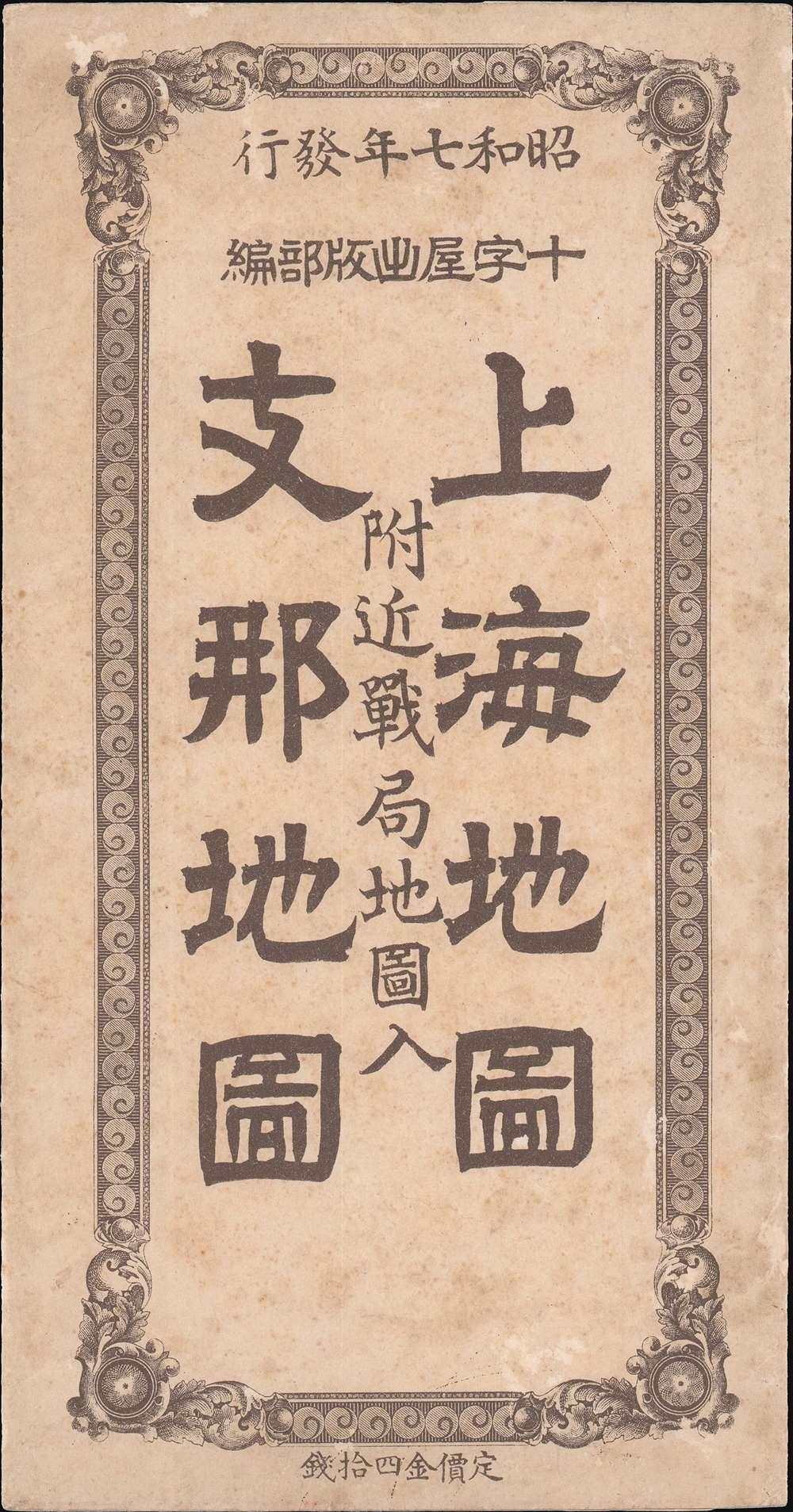 Shanghai at the moment of the Shanghai Ceasefire Agreement in which the city became a demilitarized zone.
$2,500.00

A very scarce March 5, 1932, map of Shanghai, China, issued by Osaka-based Cross-House publishing firm. The map was issued to illustrate the Shanghai Ceasefire Agreement (淞沪停战协定), a peace treaty between China and Japan that made Shanghai a demilitarized zone. The map follows the January 28 Incident, also known as the Shanghai Incident (January 28 - March 3, 1932), a conflict in the Shanghai International Settlement between the Republic of China and the Empire of Japan. The map focuses on the concession regions, using color coding to distinguish between the British and American Concessions (red), the Japanese controlled region (Orange), and the French Concession (Yellow). Along the bottom of the map, there is a dramatic view of the Bund - marking this map as part of a lineage of similar maps by Fusazo Sugie (杉江房造), although it is distinct and only stylistically related to the others. The verso (back) of the page features a large map of China, Manchuria, and Korea - a region that would soon be embroiled in war.

The conflict of January 28th, 1932, also known as the Shanghai Incident or Shanghai War, was a precursor to the Second Sino-Japanese War, which would begin a few years later. Following several alleged attacks on Japanese nationals, the Japanese launched a blitzkrieg style attack on Chinese Nationalist forces with the supposed intent of protecting Japanese civilians residing in the Hongkou District, an informal Japanese Concession within the International Settlement. The Chinese Nationalist troops concentrated in Zhabei in order protect the strategically important Shanghai Railway Station, through which supplies and reinforcements could be readily delivered. The Chinese resistance proved stubborn and both sides established perimeters along the Huangpu River. A similar perimeter was stabled to the south, along the Wusong River, to protect the British and French Concessions. The Japanese nonetheless pursued their attack, using gunboats on the Wusong River and Huangpu River to harry the Chinese. Ultimately, the two sides fought to a near standstill. On March 5th, the League of Nations forced the Japanese to sign a ceasefire, the Shanghai Ceasefire Agreement (淞沪停战协定), with China, turning Shanghai into a demilitarized zone.

This map was drawn by Katsura Todo (取藤勝藏) and published by the Cross House (十字屋編) firm in Osaka, Japan. As noted in the opening paragraph, this view stylistically resembles other similar maps issued both earlier and later by the prominent Japanese cartographer, Fusazo Sugie (杉江房造). It is, nonetheless, distinct, both cartographically, and with regard the Bund view, which is unique. It is rare and does not appear in Virtual Shanghai or other map archives. We are aware of no other confirmed examples.

Cross House (十字屋編; fl. 1930 - 1945) was an Osaka based Japanese publishing house active in the first half of the 20th century. They published books and maps.

Very good. Accompanied by original envelope. Map of China on verso. Wear on old fold lines.
Looking for a high-resolution scan of this?