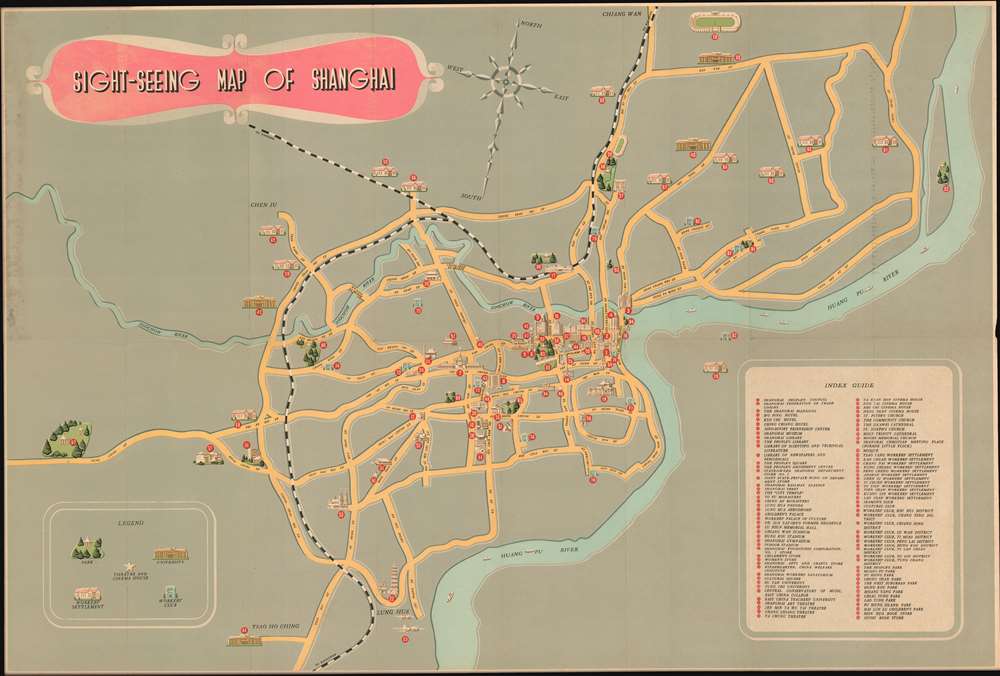 A charming c. 1955 art deco map of Shanghai, China, issued for tourists by the Shanghai People's Art Publishing House and the China International Tourist Service. The map centers on the historical business district of Shanghai, including the old concession area, but extends north as far as Chiang Wan, south to encompass Long Hua Airport, and west as far as what is described as 'West Suburban Park', which most likely corresponds to the modern day location of Shanghai Zoo. The map tackles the urban complexity of Shanghai with a minimalist aesthetic that removes unnecessary details (such as minor roads) but highlights important locations with indexed pictorial vignettes. There are some 95 indexed sites, but we are not sure how easy it would be to actually get to one of the locations cited using this map, especially those in Pudong, which are apparently inaccessible by any roadway. The map folds into its original binder which is illustrated with a sapan (Chinese sailboat) in front of the Bund.

This map was published c. 1955 by the Shanghai People's Art Publishing House and the China International Tourist Service. While undated, some of the content helps us narrow the date. The use of the term 'Shanghai Mansions' to describe the Broadway Mansions suggest it must date from 1951 - 1969, during which time the name was in use. Likewise, Longhau airport was used only from 1949 to 1966. As well, the Sino-Soviet Friendship Center was a popular attraction in the 1950s.

Good. Attached to original binder. Minor wear on original fold lines. Even toning.
Looking for a high-resolution scan of this?