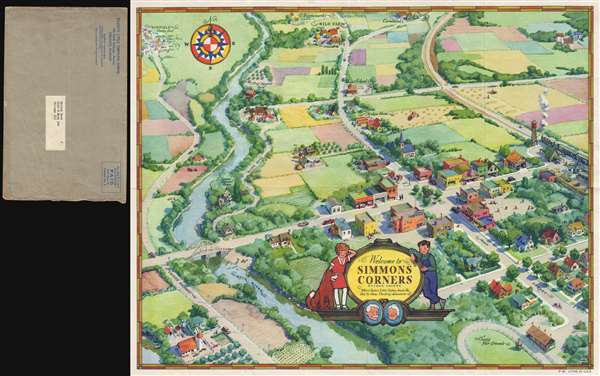 An uncommon 1936 Map of the idyllic fictional town of Simmons Corners, Tucker County, made popular by the Little Orphan Annie radio show. The radio show is based upon a newspaper comic strip by the same name by Harold Gray. The show, which was set in the fictional rural American community of Simmons Corners, is praised as being the oldest American children's radio program. It was released in 1931 and ran until 1942. While Gray's original comic was often charged with political content, the radio show, which was sponsored by Ovaltine, was largely an advertisement for that product, the promotion of which consumed nearly half of each 15-minute episode. Nonetheless, the show became enormously popular with children across the country. Ovaltine further capitalized on the show by introducing a series of 'premiums' obtainable only by mail with a set number of 'proofs of purchase.' Among the premiums were coffee mugs, secret decoder rings, and this 1936 map of Annie's stomping ground, Simmons Corners. The map is accompanied by its original shipping envelope addressed to one Marion Heck of Chicago Illinois.

This map was drawn by Keith Ward, a well-known American illustrator. Released in 1936, when ward was only 20, this must have been one of his earliest commercial works.

Keith Ward (1906 – 2000) was an American commercial artist and illustrator active in California during the middle part of the 20th century. Ward is most famous or illustrating 1940 reading primer Dick and Jane. He also created Elsie the Cow, the Texaco Dalmatians, and Elmer of Elmer's Glue. Ward is known for being skilled in a diversity of styles and mediums.

Very good. Slight wear on original fold lines. Comes with original shipping envelope.
Looking for a high-resolution scan of this?