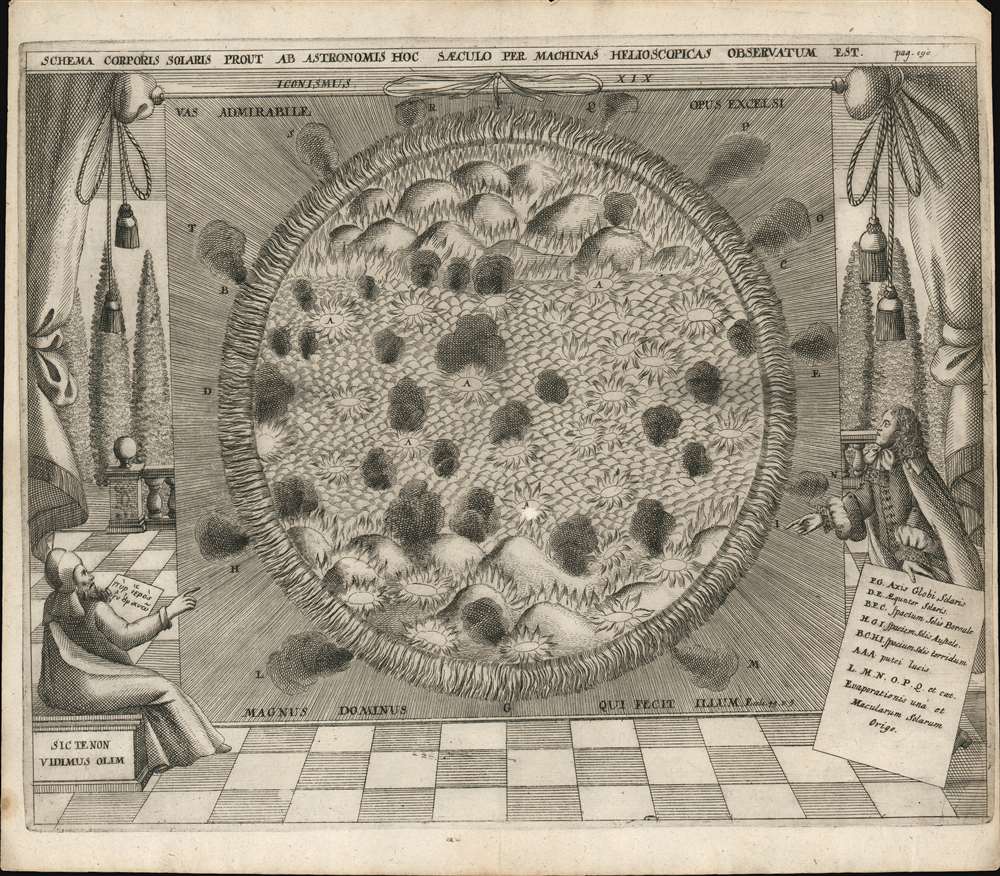 A remarkable finely engraved 1685 map of the surface of the Sun by Johann Zahn. The view provides a dramatic image of the Sun based upon the revolutionary 1665 work of the Jesuit polymath Athanasius Kircher (1602 - 1680). The map was engraved for Zahn's important study of optics and optical devices, the Oculus Artificialis Teledioptricus Sive Telescopium. In this view, the Sun, presented as a large wall hanging in an Italianate portico, is defined by erupting solar volcanoes, mountains, and dark smoke plumes. It is surrounded by two scientist/philosophers who discuss the mysteries of light and optics. A tablet in the lower right references letters coded to the diagram, including the solar axis, the solar equator, the northern and southern polar regions, the central equatorial region, sunspots (A), and solar prominences (puffs of smoke).

This image of the originated in Kircher's 1665 Mundus Subterraneus. The work focused on tides, volcanoes, and other geo-thermal activity, but was expansive in its scope and also attempted to address such mysteries as sunspots and cosmic phenomena. As regards sunspots, Kircher rejected the views of both Galileo Galilei (1612) and Jesuit Christoph Scheiner (1611), who argued (correctly) that the sun was in motion and (incorrectly) that sunspots were caused by small bodies rotating about the Sun. He instead embraced the Aristotelian notion that the Sun was unmoving and constant, and Kepler's idea that sunspots were smoke emanating from explosions on the surface of the Sun.

This image was engraved by Zahn in 1685 for volume III of his Oculus Artificialis Teledioptricus Sive Telescopium. While there were several issued to about 1708, the strong rich strike and ink shading visible here suggests an early strike off the plate. The volume is noted in the OCLC in 5 libraries, in various editions, but the separate plate is cataloged only digitally.

Johann Zahn (1641-1707) was a German philosopher, cartographer, scientist and mathematician active in the second half of the 17th century. Zahn was a canon of the Premonstrate Order in Würzburg under Cardinal Brandr Beekman-Ellner. Truly an Enlightenment scholar, Zahn is best known for his contributions to the early development of photography associated with his most celebrated work, Oculus Artificialis, a detailed discussion of the Camera Obscura. Zahn was also a prolific writer, illustrator, and engraver whose pseudo-scientific works include the Mundus Mirabili, or the "Marvelous World", which features a number of beautifully engraved maps. Learn More...


Athanasius Kircher (c. 1601 - 1680) was a 17th century German Jesuit scholar and one of the most respected and remarkable men of his time. A master of languages, mathematics, science, geography, physics and oriental studies, many consider Kircher to be 'the last true Renaissance man.' Kircher attained almost global fame in his lifetime for his numerous scholarly publications. Indeed, Kircher was the first documented scholar able to fully support himself on his own work, which, in his case, included some forty volumes on diverse fields. As a Catholic in Germany, Kircher was frequently at odds with the rising powers of Protestantism. Consequently, in 1628 he joined the priesthood and after extensive world travels eventually settled in Rome. There he was employed as a Professor of Mathematics and Oriental Languages at the Collegio Romano. Inspired by the eruption of Vesuvius in 1637 and the two weeks of earthquakes that shook Calabria in 1638, Kircher turned his considerable intellect to the natural world. Kircher's research into Geography and Oceanography culminated in the postulation that tides and currents were caused by water moving to and from a great subterranean ocean. Kircher published his geographic work in the important 1664 Mundus Subterranous, which in addition to several world and oceanic charts, included a fascinating map of Atlantis. Kircher is nonetheless, not unimpeachable. One anecdote tells how a rival scholar presented Kircher with a manufactured gibberish manuscript he claimed to be an recently discovered ancient Egyptian text in need of translation. Kircher produced the translation instantly. In addition to his significance as a scholar, Kircher is best known for his invention of the Magic Lantern, precursor to modern cinema. He also founded the Museum Kircherianum in Rome. Learn More...

Zahn, Johann. Oculus artificialis teledioptricus sive Telescopium: ex abditis rerum naturalium et artificialium principiis protractum novâ methodo, eâque solidâ explicatum ac comprimis è triplici fundamento physico seu naturali, mathematico dioptrico et mechanico, seu practico stabilitum. (Würzburg: Herbipoli) 1685.     Oculus Artificialis Teledioptricus Sive Telescopium (The Long-Distance Artificial Eye, or Telescope) was first published in 1685 in Würzburg by the cleric Johann Zahn. The voluminous lavishly illustrated work is a compressive history of the science of optics and a study of optical instruments. The work describes a variety of instruments, including the camera obscura and magic lantern (whose invention he credits to Athanasius Kircher), and various other lanterns, slides, peepshow boxes, telescopes, microscopes, lenses, and reflectors. The work includes the first illustration of a portable hand-held camera obscura. At the heart of the imagined device is a mirror reflex mechanism, technology that would not be fully realized until a century and a half later with the development of photography.

National Library of Medicine, 101596432.
Looking for a high-resolution scan of this?