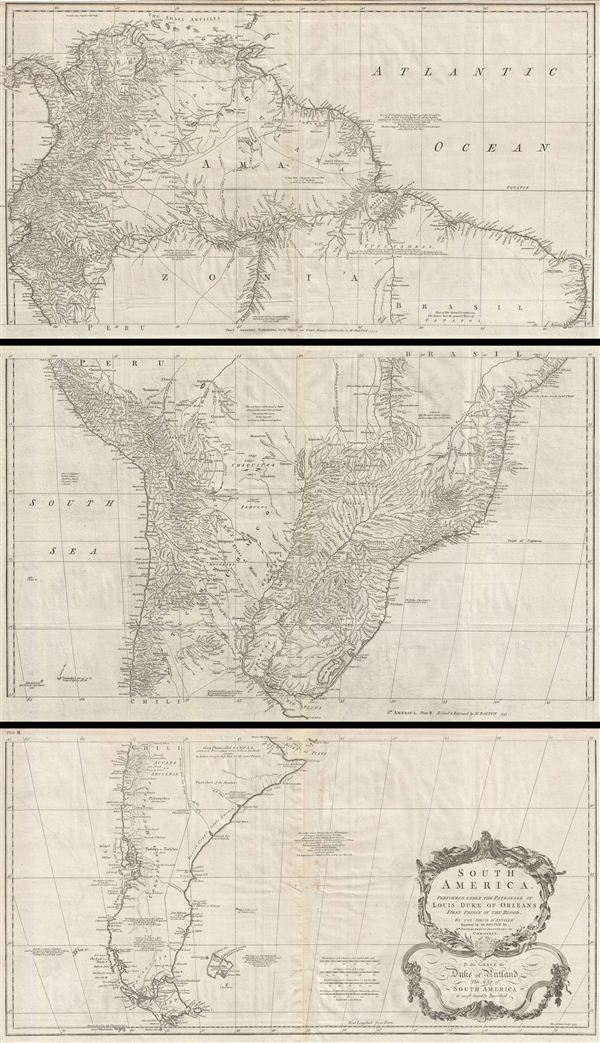 A curious and uncommon three panel 1755 wall map of South America by the English publisher M. Postlethwayte. A derivative of D'Anville's earlier map, Postlethwayte's map covers the entire continent from the Lesser Antilles and Panama to Cape Horn. Published in three separate panels, this map can be either joined as a single massive map as assembled, as above, in separate sections. D'Anville's map, and by extension this revision of that map by Bolton and Postlethwayte, represents a serious attempt to compile all of the accurate scientific knowledge of the South American continent available at the time. While cartographically very similar to D'Anville's map, Postlethwayte's work is a full re-engraving in which all text has been translated to english, a new cartouche of a rococo ethic incorporated, and Postlethwayte's own fascinating Anglo-centric commentary added. This primary cartographic development on this, the Postlethwayte variant of D'Anville's map is the incorporation of data associated with the expedition of Charles Marie de La Condamine - which being published in 1748 Postlethawyte postulates was not available to D'Anville.

Our survey of this map begins on the coast which Spanish and Portuguese navigators had mapped with considerable accuracy as early as the late 16th century. This, like most early maps of the area, contrasts a detailed mapping of the coast with a speculative discussion of the interior, particularly Patagonia and the Amazon Basin. The map offers a fairly accurate discussion of both the east and west coasts with exceptional detail in the populated Andean regions of Venezuela, Columbia, ecuador (Labeled Quito), and Peru. Cuzco, Lima, Quito, Valladolid, Arequipa, Trujillo and other important trading centers of the region are noted. In Portuguese controlled Brazil, Rio de Janeiro, San Salvador and San Sebastian are identified.

Much of South America's interior, particularly the inland river basins, dominated by the Paraguay River in the south, the Amazon River in the center, and the Orinoco in the north, were largely unexplored. Nonetheless, several corrections and updates appear. D'Anville (also Bolton and Postlethwayte) have done away with the myth of Lake Parima (supposedly in southern Guyana), the site of the legendary city of Manoa or el Dorado, and instead correctly identify the vast flood plain located in this same region. The cities and tribes identified along the Amazon river mostly date to the journals of the harrowing 16th century Francisco Orellana voyage - a clear indication of how little information actually emerged from the Amazon Basin.

Further south, the cartographers have retained the mythical Laguna de Xarayes as the northern terminus of the Paraguay River. The Xarayes, a corruption of 'Xaraies' meaning 'Masters of the River,' were an indigenous people occupying what are today parts of Brazil's Matte Grosso and the Pantanal. When Spanish and Portuguese explorers first navigated up the Paraguay River, as always in search of el Dorado, they encountered the vast Pantanal flood plain at the height of its annual inundation. Understandably misinterpreting the flood plain as a gigantic inland sea, they named it after the local inhabitants, the Xaraies. The Laguna de los Xarayes almost immediately began to appear on early maps of the region and, at the same time, almost immediately took on a legendary aspect. Later missionaries and chroniclers, particularly Díaz de Guzmán, imagined an island in this lake and curiously identified it as an 'Island of Paradise,'

D'Anville, to his credit, shows the 'Laguna' and its island in a much reduced form compared to earlier cartographers acknowledges that its existence is dubious. Our map, clearly referring to the work of Díaz de Guzmán, identifies the island as the 'I. de Orejones.'

Far to the south Patagonia is crisscrossed with a number of speculative rivers based upon assumptions from earlier cartographers. Postlethwayte includes annotations referencing the failure to discover one such pass between Julian Bay (Chile) and the Campana River. earlier in the century speculation on such a pass fueled the famous South Sea Company, one of the modern world's first stock bubbles, but when no such pass was discovered, the bubble burst. Another element that bears attention in this region is a curious note about an island on the Sauces River (Rio Negro, Argentina) that is supposedly inhabited by white people - possibly the survivors of a shipwreck?

Postethwayte's 1755 version utilized Samuel Bolton to revise, translate, and had amendments to the map, however, it is little different in most aspects from the D'Anville map. The present example is on three panels which can joined as a single map. This map was drawn by S. Bolton, based on D'Anville, and engraved by Thomas Kitchen for publication in Postlethwayte's 1755 edition of the Dictionary of Commerce.