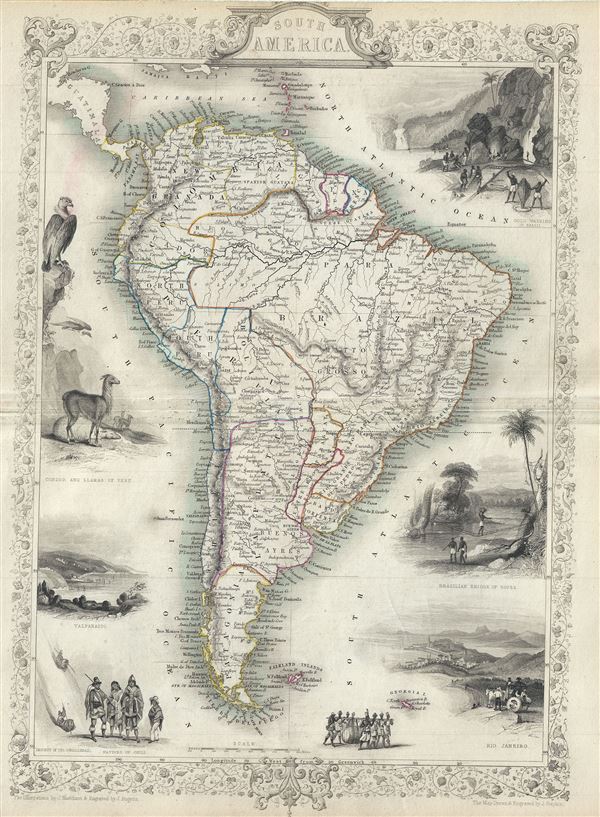 This is John Tallis's extremely attractive c. 1850 Map of South America. Depicts the continent divided into political zones and surrounded by attractive decorative vignettes. Peru is shown divided into North Peru and South Peru. Ecuador, Venezuela, and Columbia are united as Grand Columbia. Modern day Argentina is divided into La Plata, Entre Rios, and Patagonia. Chili extends southward only to the border of Patagonia. Bolivia has a coast. Vignettes include, from the top left in a counterclockwise fashion, a scene from Peru with a Condor and a Lama, a view of harbor of Valparaiso, a sketch of indigenous peoples descending from the Cordilleras, an image of the natives of Chili, an image of indigenous peoples carrying a large barrel, a view of Rio de Janeiro, a drawing of a Brazilian rope bridge, and a view of Gold Washing in Brazil. The whole is surrounded by an attractive decorative border with a floral motif. Prepared by J. Marchant, J. Rogers, and J. Rapkin for issued in John Tallis' 1851 Illustrated Atlas…