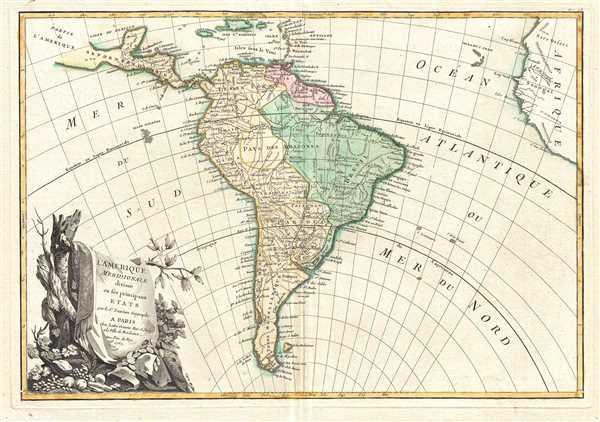 This is a 1762 Jean Janvier map of South America. The map depicts from the island of Hispaniola and the Yucatan to Tierra del Fuego and Cape Horn and from Mexico to Africa. Highly detailed, national boundaries are illustrated and myriad cities, regions, tribes, mountains, and rivers are labeled. The mythical Laguna de Xarayes (Xarayes Lac), the supposed gateway to paradise or El Dorado, is identified as the northern terminus of the Paraguay River. An erroneous link between the Amazon and Orinoco Rivers is illustrated on this example as well. A large decorative title cartouche appears in the lower left corner.

As this map was drawn, most of South America was dominated by the vast and increasingly mismanaged Spanish empire. Only Portuguese Brazil and Spanish and Dutch enclaves in Guyana disrupted Spain's continental hegemony. All three empires were aggressively exploiting the continent, with the mountainous western regions being rapaciously mined to supply Chinese and European needs for silver to stabilize their economies, and the coastal lowlands were dominated by sprawling sugar plantations intended to satisfy Europe's increasingly insatiable sweet tooth. Meanwhile, much of the interior, in particular the Amazon and Orinoco basins, remained largely unexplored.

This map was drawn by Jean Janvier and for inclusion in Jean Lattre's Atlas Moderne.