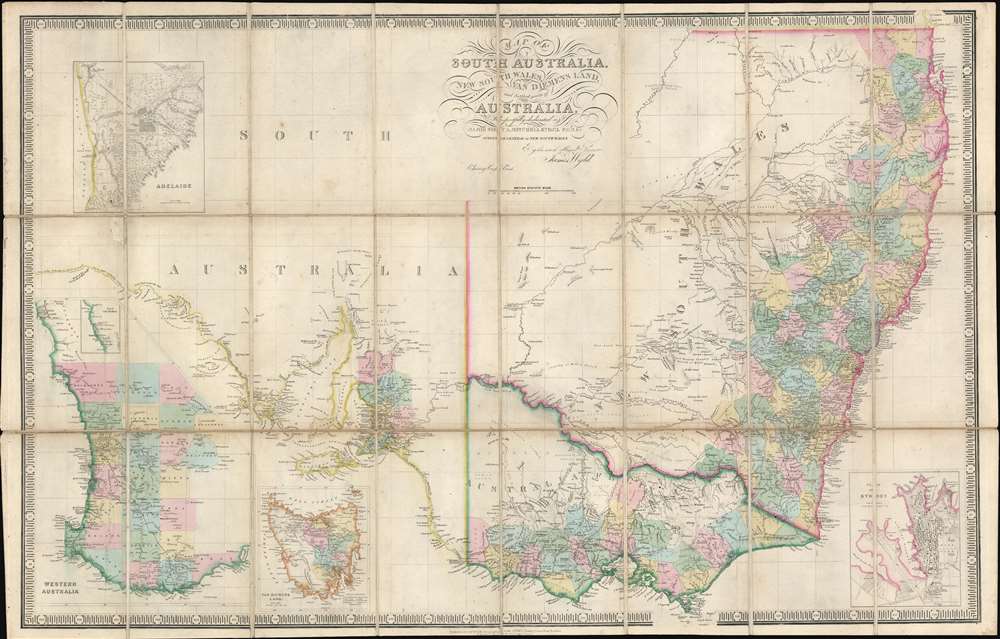 Best map of southeastern Australia during the 1851 Australian Gold Rush.
$950.00

An exceptional c. 1851 James Wyld map of southeastern Australia, Tasmania (Van Diemen's Land), New South Wales, and Western Australia, issued to capitalize on the 1851 Australian Gold Rush. Probably the finest map of Australia then extant, the map draws heavily on the explorations of Sir Thomas Livingstone Mitchell (June 15, 1792 - October 5, 1855), an influential surveyor and explorer to whom the map is also dedicated. Mitchell led a series of expedition throughout south-eastern Australia between 1830 and 1836.

This map proved popular due to general interest in the region associated with the 1851 gold strikes. It went through multiple editions, often with slightly variant titles - and accordingly at high zoom there are considerable indications of erased and revised content. The earliest known variant of this map is 1839, based on an advertisement in a history of South Australia published in that year. Updated reprints continued to be issued well into the 1850s. The present edition mentions Wyld's great globe (60 feet in diameter) in Leicester Square, which means it was must have been issued between 1851 and 1862 - when the globe was standing. In addition, it references the Charing Cross East address, where Wyld maintained offices from 1837 to 1852. Thus, this map could be issued no earlier than 1851, and no later than 1852. This map most commonly appears uncolored, with the 1851- 1852 edition commonly receiving full color treatment, as here, likely due to increased Gold Rush Era interest in the region. Of all editions, the present Gold Rush example is the most desirable due to its historical significance and elegant deluxe treatment.