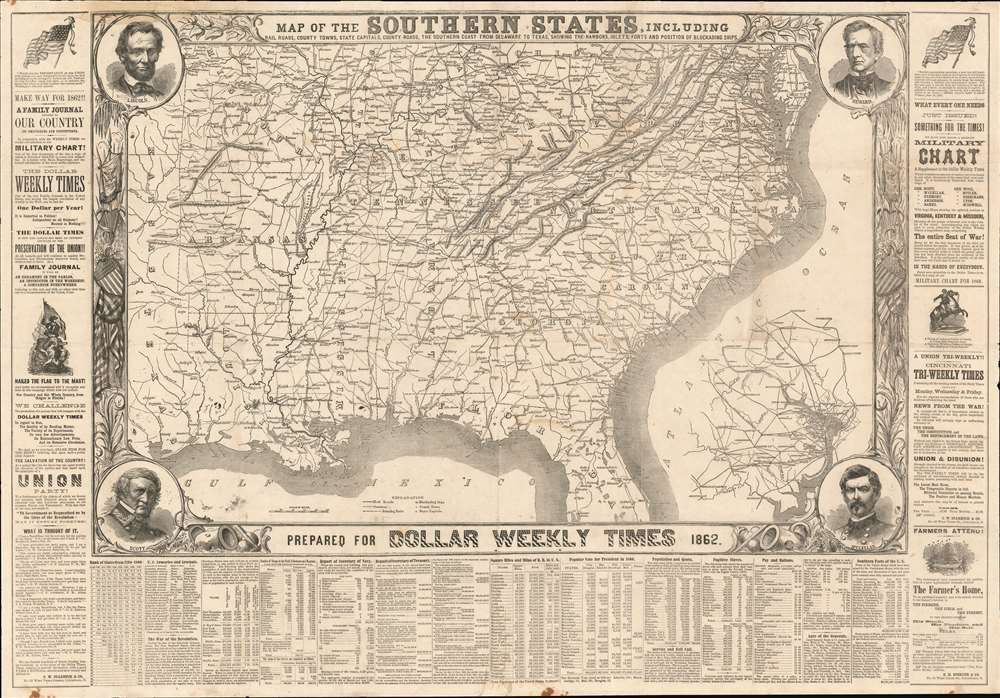 Rare map of the Southern States published during the Civil War.
$1,500.00

This is an 1862 map of the Southern United States during the American Civil War published as a supplement to the Cincinnati Dollar Weekly Times. Depicting the region from Texas and Kansas east to cover the Atlantic seaboard from Maryland south to Florida, Thus putting entire Confederacy into focus. Railroads, as arteries of transport and supply, are illustrated in detail. Major roads are illustrated as well. An inset situated in the lower right details the vicinity of Washington, D.C..

With the exception of the blockading ships situated along the coast from Delaware Bay to Galveston Bay, very little highlights the bloody struggle taking place. The border nonetheless reinforces the pro-Union position of the Dollar Weekly Times. Portraits of Abraham Lincoln, Secretary of State William H. Seward, and Union Generals Winfield Scott and George McClellan occupy the corners. The vertical sections include illustrations of a star-spangled shield, a banner adorned with the Seal of the United States, and classical weapons. A further, text heavy border surrounds the central image. Advertisements for the Dollar Weekly Times, its new military chart essential for following war news, and the Cincinnati Tri-Weekly Times occupy the left and right borders. Statistics concerning a wide range of subjects, including the popular vote in the election of 1860, the strength of the Union Navy, square miles of railroad in the United States divided by state, population by state, the number of fugitive slaves from each state, and the ages of Union generals.

The Dollar Weekly Times (185x - 1866) was a weekly independent newspaper published in Cincinnati, Ohio from sometime in the 1850s until it ceased operation in 1866. It was published by Calvin Washburn Starbuck (April 20, 1821 - November 15, 1870). Starbuck was born in Nantucket, Massachusetts and moved to Cincinnati with his family as a child. He apprenticed as a printer, and, at the age of nineteen, he founded the Cincinnati Evening Times in 1840. The newspaper found an audience and became very popular in the area. Starbuck briefly left his business in 1864 after the Governor of Ohio called for volunteers to join the Ohio National Guard Militia and fight in the American Civil War. Starbuck enlisted for one hundred days and served as part of garrison forces in Maryland. After the war, Starbuck remained a prominent citizen in Cincinnati until his death in 1870. Starbuck also founded the Cincinnati Daily Times (the same paper as the aforementioned Cincinnati Evening Times, which survived him and was published until 1879. Learn More...