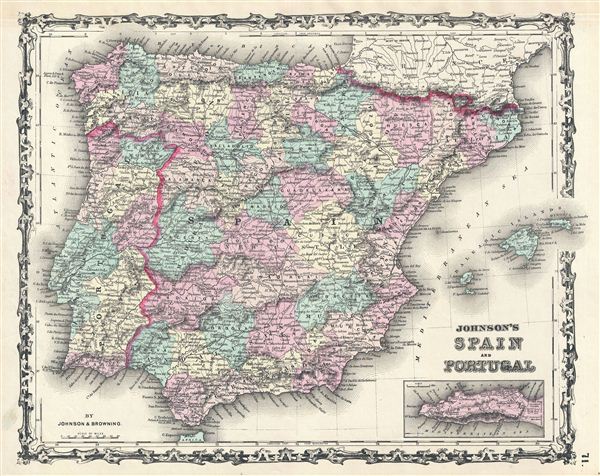 This is a beautiful example of A. J. Johnson and R. Browning's 1861 map of Spain and Portugal. The map covers all of Spain and Portugal from France to the Strait of Gibraltar and includes the Balearic Islands of Ibiza, Majorca, and Minorca. Lower right hand quadrant features an inset map of Gibraltar. As this map was being drafted, liberal sentiments within Spain were gaining momentum, leading to the Progressive Biennium, in which the Progressive Party tried to replace the conservative liberalism of the Moderate Party and advocated radical liberalism. Various towns, cities, railways, rivers and several other topographical features are noted with relief shown by hachure. It features the strapwork style border common to Johnson's atlas work from 1860 to 1863. Published by A. J. Johnson and Browning as plate no. 71 in the 1861 edition of Johnson's New Illustrated Family Atlas. This is the last edition of the Johnson Atlas to bear the 'Johnson and Browning' imprint. Subsequent editions reflect Ward's 1862 acquisition Ross C. Browning's shares in the firm.