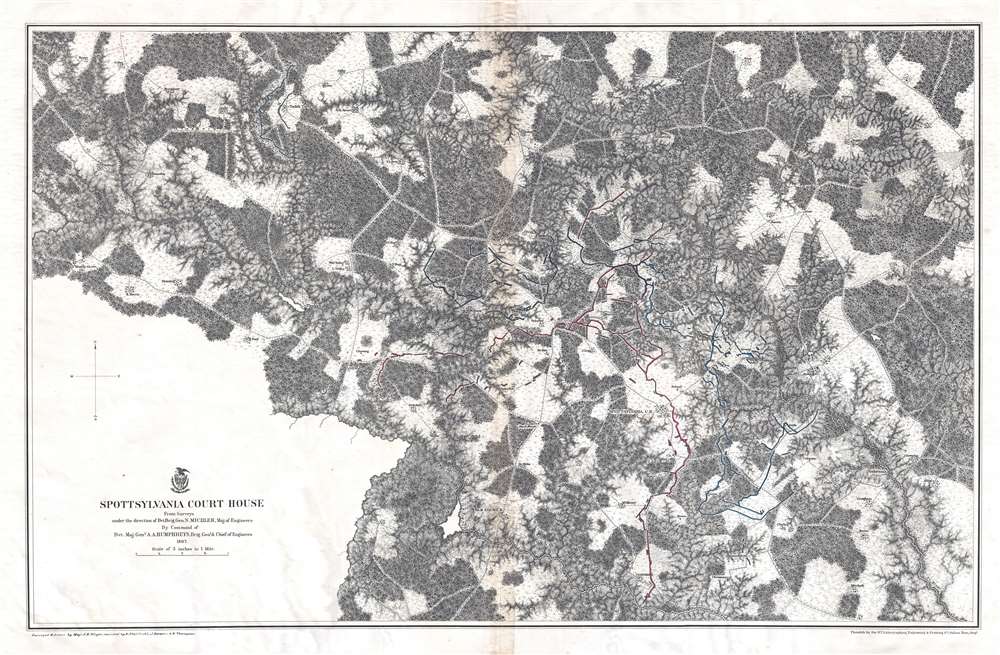 This is an 1867 John Weyss and Nathaniel Michler map of the battlefield of Spotsylvania Court House in Virginia, the second battle in General Ulysses S. Grant's 1864 Overland Campaign in Virginia. The map depicts the region from Shady Grove Church to the Abbot homestead and from Piney Branch Church to the Crutchfield farm.

The Battle of Spotsylvania Court House

Sometimes referred to as the Battle of Spotsylvania, the battle is also known by by the 19th-century spelling of the name, Spottsylvania, as it is spelled here. The battle lasted from May 8 through May 21, 1864, directly after the Battle of the Wilderness. After withdrawing from The Wilderness, Generals Ulysses S. Grant, George Meade, Phil Sheridan, and the rest of the Union Army of the Potomac continued to move south, toward Spotsylvania Court House. Though his destination was unclear, General Lee and the Army of Northern Virginia mirrored the Union Army's move south, and knew, no matter where Grant had ordered his army, that the crossroads at Spotsylvania Court House would play a critical role. Thus, Lee ordered his army to move south, and, even though he did not believe it to be urgent, Lee and the Confederate army beat the Union troops to the crossroads at Spotsylvania Court House. Weeks of bloody fighting ensued, with the Confederate army ably repelling every attack by Union troops. On May 21, with nearly 32,000 casualties (killed, wounded and missing) between the two sides, General Grant disengaged and ordered his army to again move south in an effort to outflank Lee's army, which led to the next battle in the Overland Campaign, the Battle of North Anna.

Battle lines illustrating the fighting during the Battle of Spotsylvania Court House are illustrated here, with Federal lines illustrated in blue and Confederate lines colored red. None of the battle lines are labeled in any fashion, making tracing exactly how the battle progressed from this map not an easy task. Myriad farms and homesteads are labeled throughout, making it easier to trace the events of the battle, since most are referred to either by the nearest farm or road. The road network is also easily traced, as are the rivers and streams in the region.