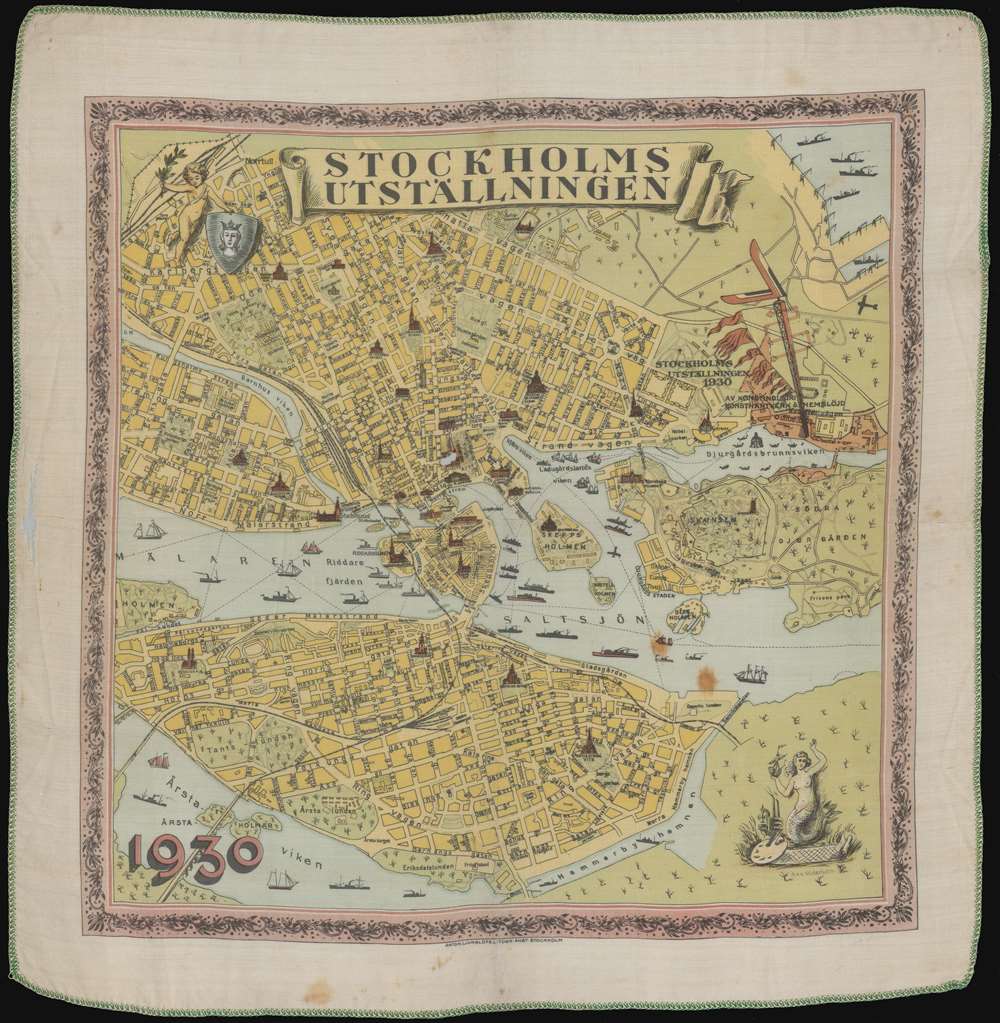 This is a 1930 Max Söderholm silk pictorial tourist hankerchief map of Stockholm, Sweden. Produced for the 1930 Stockholm Exhibition (Stockholmsutställningen in Swedish), lays out the city for visitors. The exhibition is situated along the right border, shaded orange, and labeled with the exhibition's 'Flying V' logo. Profile views of numerous sites around the city highlight places of interest, including the National Museum, the Royal Palace, the Parliament House, the Storkyrkan, and Stockholm City Hall. The unique format, a handkerchief, was more resistant to wear, dampness, and other damage than traditional paper maps. Visitors could wipe the sweat from their brow while navigating the fair!

The 1930 Stockholm Exhibition, or Stockholmsutställningen, took place in Stockholm from May 16 to September 29, 1930. It celebrated architectural Functionalism and International Style. Organized by the Svenska Slöjdföreningen and the City of Stockholm, Swedish craftsmen, artists, and companies exhibited at the fair with over four million visitors. Functionalism became a major influence on Swedish architecture and after the fair several residential settlements were constructed in the Functionalist style.

This map was created by Max Söderholm and printed by Anton Ljunglöfs Litografiska Anstalt in 1930. No examples are cataloged in OCLC and only a handful of examples have appeared on the private market in recent years.

Max Erik Hugo Söderholm (June 7, 1908 - November 17, 1991) was a Finnish-Swedish painter, artisan, and architect. Born in Turku, Finland, Söderholm studied decorative painting in Stockholm at the Technical School (Tekniska skolan) and then at the Royal Academy of Fine Arts (Kungliga konsthögskolan) from 1927 until 1932. He also studied at the Academy of Fine Arts in Florence during the 1930s. His work consisted of oil paintings, decorative murals, bookbindings, and other media. He married Karin Sigrid Kristina Sjögren in 1958. He died in Stockholm. Learn More...

Good. Exhibits loss on left side near border not effecting the printed image or border. Slight area of loss above and to the left of center.
Looking for a high-resolution scan of this?