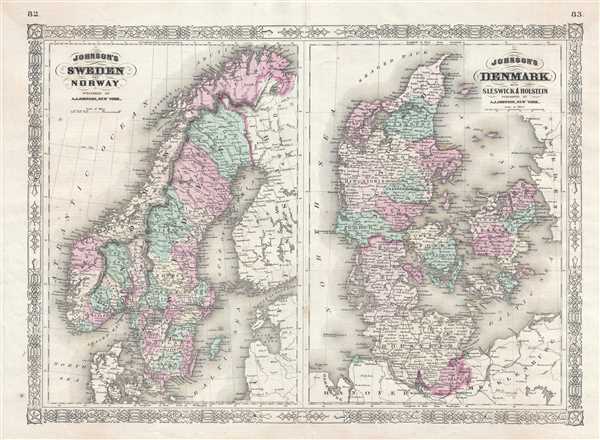 This is an 1866 A. J. Johnson map of Norway, Sweden, and Demark. A composite on one folio sheet of two maps that were formerly issued on separate sheets, these maps depict Norway, Sweden, Denmark, and the German state Schleswig-Holstein. The left-hand map illustrates Norway and Sweden, with their provinces labeled and shaded different colors for easy differentiation. Numerous cities and towns are labeled, including Stockholm and Christiania (the name by which Oslo was known from 1624 until 1925). Myriad roads, rivers, and lakes are illustrated, along with Norway's iconic fjords. The right-hand map depicts Denmark and the German state Schleswig-Holstein. Denmark's provinces are labeled and shaded different colors to allow for easy identification, while Schleswig (Sleswick) and Holstein, then separate political entities, are each shaded different colors as well. Numerous cities and towns are labeled throughout, including Copenhagen. Roads, rivers, and lakes are illustrated throughout, along with railroads on Zealand Island and in Schleswig-Holstein.

These maps were published by A. J. Johnson as pages 82 and 83 in the 1866 edition of Johnson's New Illustrated Family Atlas.