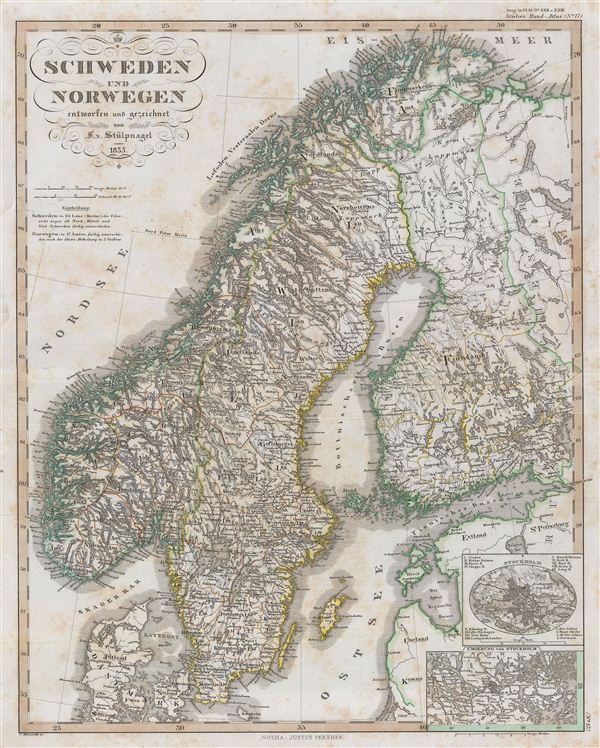 A fascinating example of the 1853 Perthes map of Sweden and Norway. The map covers from the Arctic Sea south to Denmark and east as far as the Gulf of Finland, including the modern day nations of Sweden, Norway, and parts of adjacent Denmark and Finland. Two inset maps in the lower right quadrant detail Stockholm and environs of Stockholm. Of particular interest is the Lofoten Maelstrom (Malstrom) in northwestern Norway. This legendary whirlpool was the inspiration for edgar Allen Poe's classic tale Descent into the Maelstrom. In reality, it is a periodic and powerful current caused by tidal variations in the region. Throughout, the map identifies various cities, towns, rivers and assortment of additional topographical details. Political and regional borders are highlighted in outline color. Unlike other cartographic publishers of the period, the Justus Perthes firm, did not transition to lithographic printing techniques. Instead, all of their maps are copper plate engravings and hence offer a level of character and depth of detail that was impossible to find in lithography or wax-process engraving. All text is in German. Designed and drawn by Friedrich von Stülpnagel and issued as plate no. 17 in the 1854 edition of Stieler's Hand-Atlas.