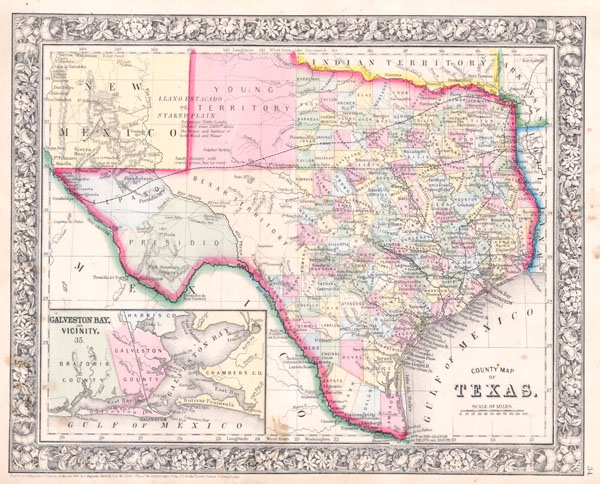 A beautiful example of S. A. Mitchell Jr.'s 1864 map of Texas and part of New Mexico. Detailed to the county level with notations on railroads, topographical features, springs and cities. Lower left hand quadrant features an inset map of Galveston Bay and Vicinity. One of the most attractive atlas maps of Texas to appear in the mid 19th century. Prepared by S. A. Mitchell Jr. for inclusion as plate 34 in the 1864 issue of Mitchell's New General Atlas. Dated and copyrighted, 'Entered according to Act of Congress in the Year 1860 by S. Augustus Mitchell Jr. in the Clerk's Office of the District Court of the U.S. for the Eastern District of Pennsylvania.'

Very good condition. Minor spotting to margins. Minor discolration extending slightly into the printed area of the map just the right of the inset. Else clean. Blank on verso.