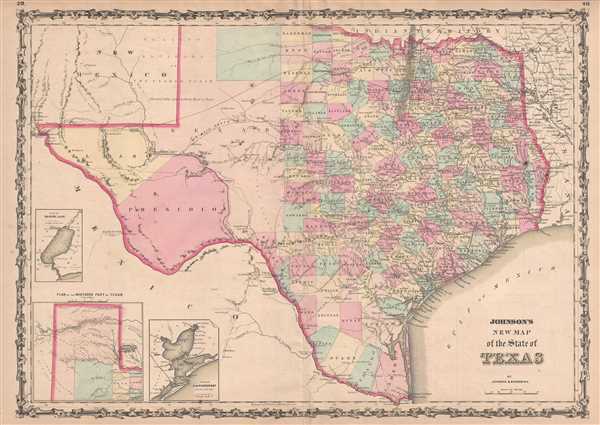 This is an exceptional 1860 first edition second state example of A. J. Johnson and Ross C. Browning's highly desirable map of Texas. Created shortly before the American Civil War, this extraordinary folio map details the state of Texas New Mexico and Mexico to Arkansas and Louisiana and from New Mexico and Oklahoma (Indian Territory) to the Gulf of Mexico and Mexico. The elevated Table Lands, el Llando Estadado (the Staked Plain), and the U.S. Mail Route are all illustrated and labeled, along with numerous geographical notations. Counties are illustrated, labeled, and shaded various colors to allow for easy differentiation. El Paso, Presidio and Behar counties dominate much of the western portion of the state.

Insets in the lower left quadrant detail Sabine Lake (with depth soundings), Galveston Bay (from the U.S.C.S.), and the northern panhandle. Throughout, Johnson identifies myriad cities, towns, rivers, creeks, and other topographical details. The whole is surrounded by the strapwork border common to Johnson's atlas maps from 1860 to 1863.

Based on a smaller 1855 map by J. H. Colton, this map was published by A. J. Johnson and Browning as plate numbers 39 and 40 in 1860 edition of Johnson's New Illustrated (Steel Plate) Family Atlas.

Very good. Light wear along original centerfold. Verso repair to centerfold separation. Foxing. Blank on verso.
Looking for a high-resolution scan of this?