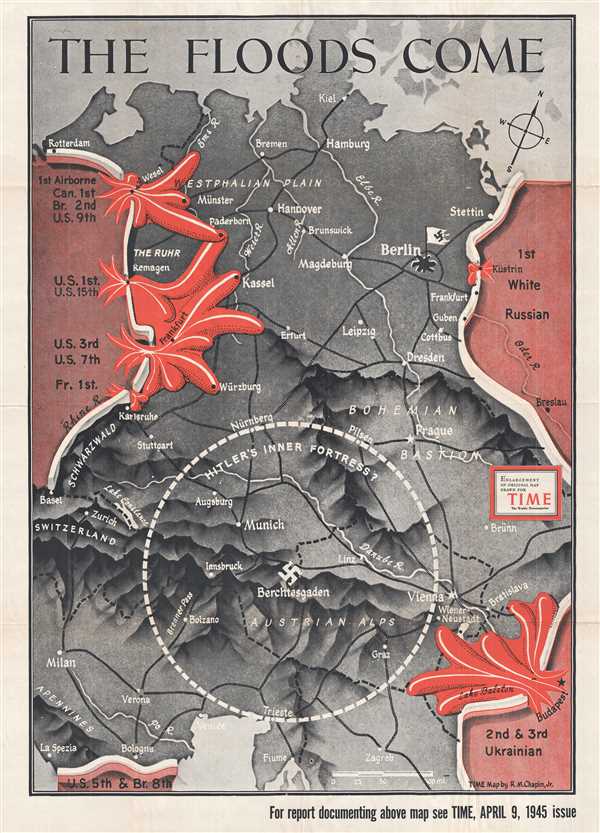 Depicts the Allied advance into Germany as a red flood over gray land.
$700.00

This is an enlarged, separate issue version of a 1945 R. M. Chapin, Jr. map of Central Europe created for TIME Magazine. The map depicts the region from just west of the Rhine River to eastern Poland and the Oder River and from the Baltic Sea to Italy and the Balkans. The Allied advance, from both east and west, is illustrated as a flood bursting through dams and coloring all of gray Germany blood red. The Americans, British, Canadian, and French armies were 'flooding' across the Rhine in four different places, including Remagen, where American forces had famously captured the last bridge traversing the river. From the east, the Soviet army was breaking through from the White Russian (Belarussian) front, as well as in the Balkans. The drive into Germany was on. In the south, U.S. and British forces are noted as having reached just outside of Bologne, Italy. As the armies raced toward Berlin, Chapin presents the viewer with a question: Does Hitler have an inner fortress around Berchtesgaden, his fabled hideaway in the Alps? Chapin sketches a circle around Berchtesgaden, stretching from Trieste to Pilsen, perhaps proposing that, even though the Allied armies had broken through into Germany, the possibility of hard fighting still lingered.

Numerous cities throughout central Europe are labeled, including Berlin, Prague, Vienna, Milan, Verona, Venice, Zagreb, Bratislava, Zurich, Stuttgart, Leipzig, Bremen, and Hamburg. Berlin, notably, is marked by a tattered white Nazi flag, instead of the blood red standard that had been flying since 1933. The Rhine, Elbe, Weser, and Oder Rivers are illustrated and labeled, along with the Alps and Apennines.

This map is an enlargement of a map that was created by R. M. Chapin Jr., a TIME Magazine cartographer, for the April 9, 1945 issue of TIME Magazine.