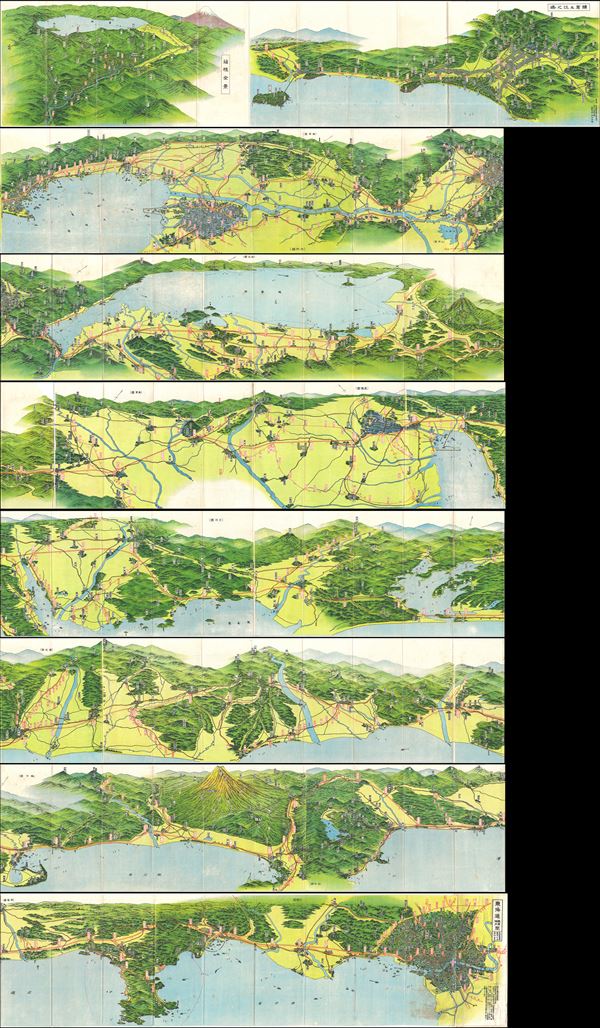 This is an absolutely stunning and rare panoramic view of the Tokaido region, Japan dating to the 1930s. Tokaido was originally an old Japanese geographical region that made up the gokishichido system and was situated along the southeastern edge of Honshu. Its name literally means 'Eastern Sea Way.' Today it generally refers to the populous region between Tokyo and Makinohara, including Shimoda, Ito, Izu, Yokosuka, Yokohama, and Mount Fuji. This 25 feet long panorama beautifully depicts the region including Mt. Fuji and Tokyo, along with important cities along the way, including Hakone, Atami, Izu, Kamakua, Shizuoka etc. At 3,775 Meters, Mount Fuji is the highest mountain in Japan and is considered to be one of the archipelago's Three Holy Mountains. Mount Fuji's exceptionally symmetrical cone is a well-known symbol of Japan and it is frequently depicted in art and photographs, as well as visited by sightseers and climbers.

This uncommon type of map evolved from the exposure of traditional Japanese view-style cartography to western technology. Views like this began to appear in Japan, Taiwan, and Korea in the early 20th century. Generally speaking such maps coincided with the development of railroad lines throughout the once vast Dai Nippon Teikoku or Japanese Empire. It is a distinctive style full of artistic flourish that at the same time performs a practical function. This particular example is both relatively early and exceptionally beautiful. It was printed via a multi-color chromolithographic process with delicately shaded tones and an easily comprehensible intuitive design.

Very good. Minor wear and some veso repair along original fold lines. Minor loss near one of the folds. Folds into original cardboard binder. Accompanied by original cover. Image above is from a single 25 feet long map.
Looking for a high-resolution scan of this?