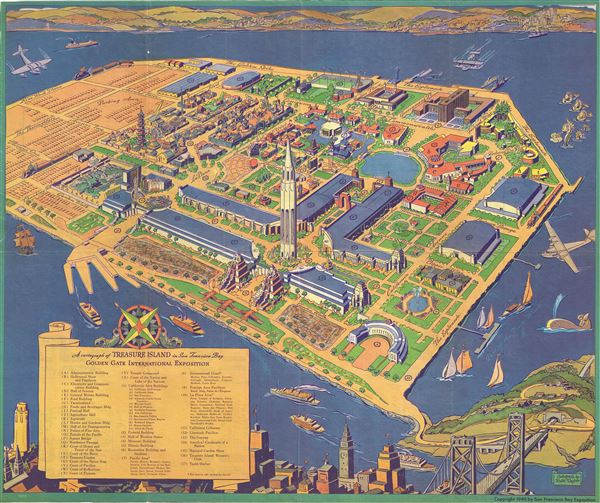 This is an attractive 1940 bird's eye view of Treasure Island in San Francisco Bay, California. Created to depict the fairgrounds of the Golden Gate International Exposition held in 1839 and 1840, the view depicts part of San Francisco in the foreground with illustrations of airplanes, whales, boats and other whimsical sea animals in the water around the Island. A key in the lower left quadrant locates the various buildings and statues, courts and pavilions marked on the map. Verso includes an index of exposition buildings and courts and detailed plans of routes and group areas.

The Golden Gate International Exposition was a 'World's Fair' held to celebrate the two new bridges of San Francisco – The San Francisco Oakland Bay Bridge and the Golden Gate Bridge. The Exposition featured, among other attractions, Tower of the Sun (Seen here in the center of the view) and a giant statue of 'Pacifica,' the goddess of the Pacific Ocean, highlighting the exposition theme, 'Pageant of the Pacific.' During the radio broadcast of the opening ceremony, President Franklin D. Roosevelt said:

Treasure Island, an artificial island constructed specially for the Exposition, would later be turned into a naval base in 1941.

The view is accompanied by a ninety six page Official Guide Book which includes, advertisements, pictures, and important information about the exposition. This view was created by Ruth Taylor White, the famous 20th century illustrator, and copyrighted by San Francisco Bay Exposition. Issued as part of the Crocker Company's Official Guide Book - 1940 Golden Gate International Exposition on San Francisco Bay.