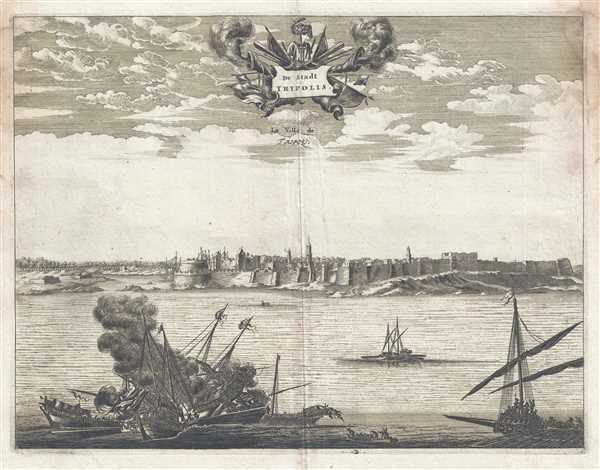 This is a 1686 Olfert Dapper view of Tripoli, the capital of Libya. The view depicts the city from the sea, highlighting its formidable coastal fortifications. In the foreground, two ships appear to have collided with each other and are burning, while other ships rush to help the unfortunate sailors aboard the two stricken vessels. Although Tripoli was a hub for barbary pirates, it does not appear that this scene depicts a battle. The fortifications in the background, protecting Tripoli, belong to Assaraya al-Hamra or the Red Castle. The Knights of St. John built the fortress after the Spanish awarded the city and the island of Malta to the Order. As the Knights of St. John had been expelled from their stronghold on Rhodes by the Ottoman Turks, they immediately recognized the need for enhanced city walls and other defenses, which led to the construction of the Red Castle Several ships are illustrated nearly out of sight in the bay, only one ship is partially illustrated, the others are simply masts.

Very good. Even overall toning. Light soiling. Wear along margins.
Looking for a high-resolution scan of this?