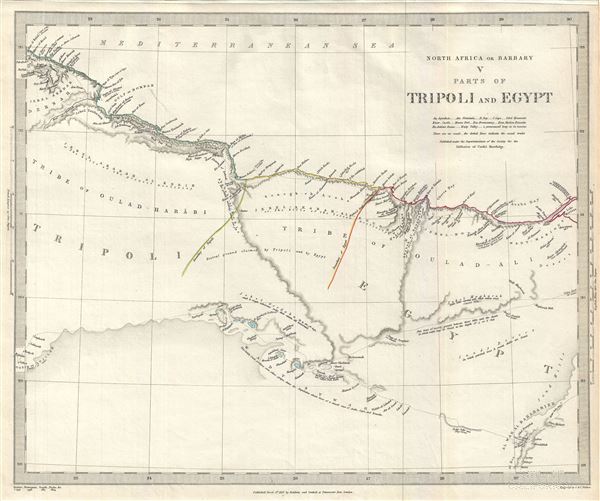 This is a scarce and beautiful 1837 Society for the Diffusion of Useful Knowledge or S.D.U.K. map of parts of Egypt and Tripoli, Libya on the Barbary Coast of Northern Africa. It covers from Al Bayda in Libya east as far as Alexandria, Egypt. The map names numerous tribes throughout, and offers other interesting cartographic annotations. Dry rivers, lakes, oases, tracks, ruins, mountains and other topography is also noted, with relief shown by hachure.

This map was prepared in the declining days of the Ottoman Empire. After the conquest of Palestine by Muhammad Ali's Egypt in 1832, British intervention returned control of Palestine to the Ottoman rulers in 1840. In Egypt, following the expulsion of the Napoleonic forces by the Ottoman Mamluk Turks, Muhammad Ali, the Ottoman viceroy of Egypt, established the Mamluk Dynasty that would rule Egypt until the Egyptian Revolution of 1952. Between 1820 and 1833, Ali annexed northern Sudan, Syria and parts of Arabia into the Mamluk Empire.