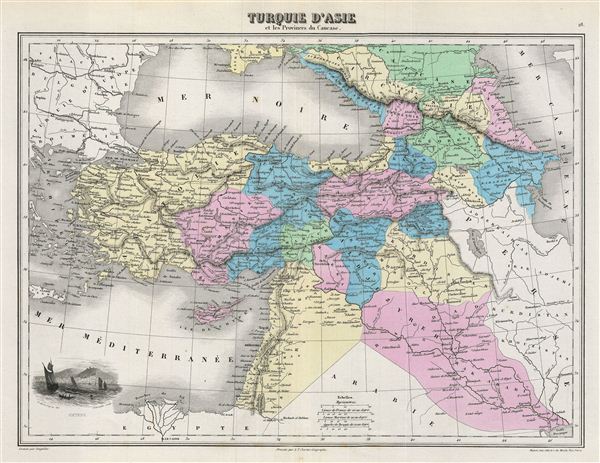 This is a fine example of J. Migeon's 1878 map of Turkey in Asia and the Caucuses. Migeon's map covers from the Crimea south to egypt, west as far as the Aegean, and east to the Caspian Sea and the Persian Gulf. The map essentially covers the mid-19th century claims of the Ottoman empire, including the modern nations of Turkey, Iraq, Kuwait, Syria, Jordan, Israel or Palestine, Armenia, Georgia, and Azerbaijan, with parts of adjacent Iran, Greece, egypt and Ukraine. The lower left quadrant includes a beautiful illustration of Smyrne (the ancient city of Smyrna). The map dates to the last days of the Ottoman empire, whose influence, though rapidly declining, dominated much of the Middle east. Various rivers, islands, mountain passes and other topographical features are identified. Migeon's Geographie Universelle, published in Paris, is one of the last great decorative atlases of the 19th century. It contains many stylistic elements of early 19th century cartography such as full hand coloring, numerous decorative vignettes, and high quality paper. This map was issued as plate no. 28 in Migeon's Geographie Universelle.