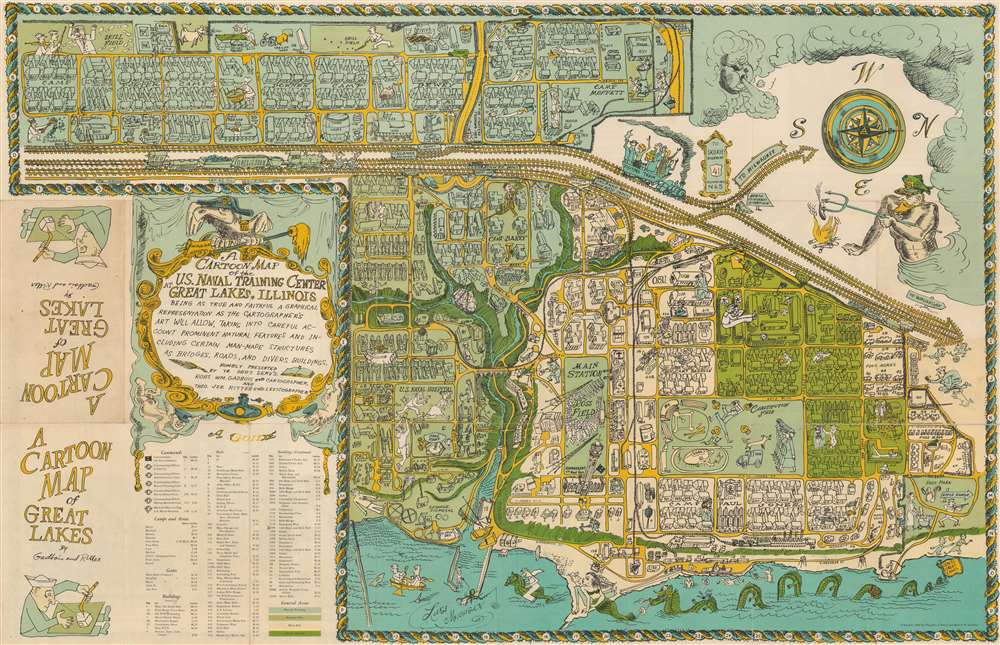 A Cartoon Map of the U.S. Naval Training Center Great Lakes, Illinois, Being as True and Faithful a Graphical Representation as the Cartographer's Art Will Allow, Taking Into Carful Account Prominent Natural Features and Including Certain Man-Made Structures as Bridges, Roads, and Divers Buildings.
1949 (dated)     22 x 34 in (55.88 x 86.36 cm)

This is a 1949 Robert William Gadbois and Theodore J. Ritter cartoon pictorial map of the U.S. Naval Training Center Great Lakes, situated on the banks of Lake Michigan just north of Chicago in Illinois. Created in the post-war period, the map depicts the training center from the east and illustrates from Camp Porter to Foss Park and from the drill field to Lake Michigan. Highly detailed, myriad buildings throughout the U.S.N.T.C. are illustrated and labeled. Numerous camps, set up to house the tens of thousands of men present at the camp at any one time, are identified (most of which are named after Naval heroes), including Camp Downes, Camp Dewey, Camp Barry, Camp Moffett, and Camp Paul Jones. Ross Field, across from the main railway station, is named after Captain Albert R. Ross who supervised the base's construction. The Naval Hospital is also prominently labeled, complete with a patient drawn chasing a nurse. Other comic illustrations include a man in a striped suit, sailors playing ping pong, and another sailor drilling holes in the Drill Field. Others include a sea monster in Lake Michigan wearing a sailor's 'gob cap', a sailor riding a gigantic sea horse, and another sailor being romanced by a mermaid. There's even an octopus using a fishing pole fishing off a pier! A large decorative cartouche is situated in the lower left quadrant, just above an index of over one hundred buildings located throughout the base.

This map was created by Robert William Gadbois and Theodore J. Ritter and published in 1949. It is quite rare, as we have been able to trace only two examples in institutional collections at the Library of Congress and Stanford University. We have been able to locate only three instances of this piece entering the private market in the last ten years.

Robert William Gadbois (fl. c. 1940 - 1960) was an artist active in the United States and Canada during the mid-20th century. After receiving his M.F.A. from the University of Iowa in 1950, Gadbois began teaching art at the University of Winnipeg along with three other new hires from Iowa. Gadbois and his contemporaries reenergized the art program in Winnipeg and drove a new interest in modern and surrealist art. Learn More...


Theodore J. Ritter (fl. c. 1940 - 1950) was a writer active in the United States during the mid-20th century. Ritter wrote several books about life in the navy centered around a character named Elmore which he produced with Robert William Gadbois. Learn More...