1940 Chapin Map of the Pacific and a Potential War Between the U.S. and Japan 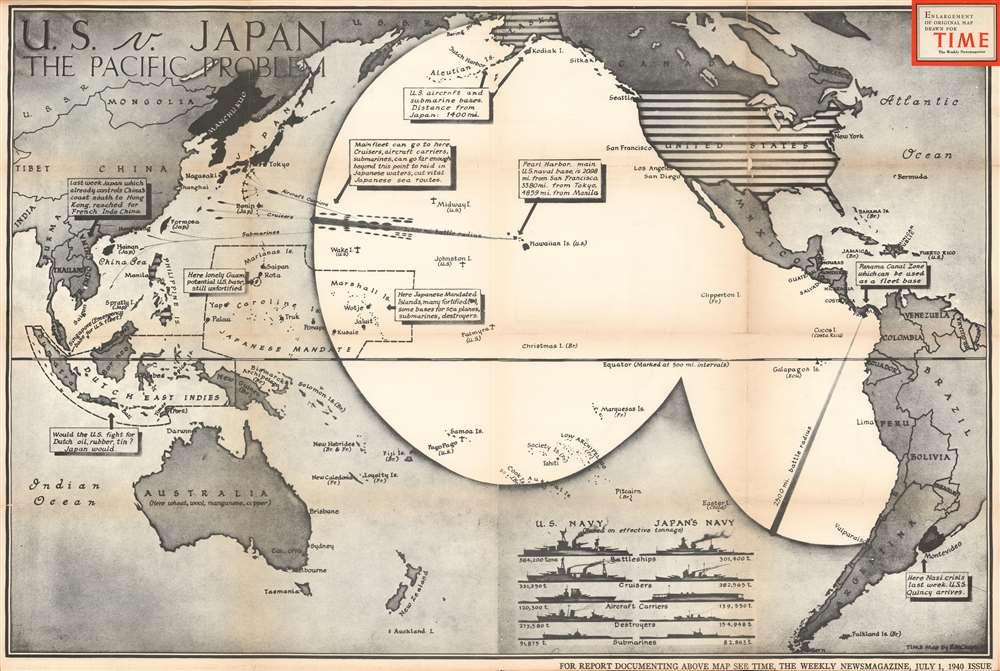 1940 Chapin Map of the Pacific and a Potential War Between the U.S. and Japan

Highlights the realities of a possible war between the United States and Japan in the Pacific.

This is a rare 1940 Robert M. Chapin, Jr. map of the Pacific Ocean and the potential for war between the United States and the Empire of Japan. Stretching from Asia to the Americas and from Alaska to New Zealand and Cape Horn, Chapin highlights areas that could become battlegrounds if the tensions between the U.S. and Japan boiled over into war. Black and white stripes identify the United States, a deliberate reference to the American flag. It is worth noting that the Philippines, an archipelago in the East Indies, is also shaded with this pattern, as the islands were a U.S. possession in 1940. Japanese territory is black, including Manchukuo, the puppet state the Japanese created in northeastern China, Taiwan (Formosa), and Hainan.

With the benefit of hindsight, modern viewers know what lies ahead, but Chapin and those viewing this map in TIME Magazine in 1940 could only guess. Islands across the Pacific are labeled and captions provide context for the most important locations. The Hawaiian Islands, specifically Pearl Harbor, are one such location, with a caption providing distances between the naval base and San Francisco, Tokyo, and Manila, the capital of the Philippines. The American base at Dutch Harbor, Alaska is also among the locations singled out, as is Guam, and island in the Western Pacific and a U.S. possession, but unfortified and poorly defended. The map also posits that the Panama Canal Zone, then occupied by the United States, could be used as a base for the fleet. Two large circles emanate across the Pacific from the Americas and Hawaii, illustrating just how far the American military can reach. This clearly informs the viewer in no uncertain terms that as of the publication of this map, the U.S. military is unable to reach the Western Pacific and Japan.

The Japanese position, however, appears to be much stronger. By 1940, the Japanese had been fighting in Asia for nine years and, as Chapin points out, had recently gained a foothold in French Indochina, a benefit gained from Nazi Germany's stunning defeat of France in June. Japanese fortified islands in the Marshall Islands and Marianas Islands are also highlighted, creating a stark contrast between Japanese and American preparedness in the region. These islands, Saipan, Jaluit, and Truk to name a few, are relatively close to Guam, and the Japanese have taken the time to fortify them, while the American have left Guam essentially undefended. Chapin also posits the question of whether or not the United States would fight for oil, rubber, and tin in the Dutch East Indies (Java, Sumatra, Borneo), and quickly states that Japan would, creating yet another noticeable difference between the two powers.

Yet another important comparison is drawn by an infographic along the bottom border: the relative tonnage of the U.S. Navy and Japanese Navy are compared side by side. The strength of each country's battleships, cruisers, aircraft carriers, destroyers, and submarines are all compared, and the U.S. tops Japan in nearly every category. This advantage, though important, would be difficult to maintain in the beginning stages of the coming war. But Japan was not completely outnumbered, as their greatest advantages, their technological superiority in torpedoes and fighter planes for example, more than made up for slightly less in naval tonnage.

This example of this map is a separate issue enlargement of a map that was created by Robert M. Chapin, Jr. and published in the July 1, 1940 issue of TIME Magazine. The OCLC records one example in the institutional collection at Franklin and Marshall College.