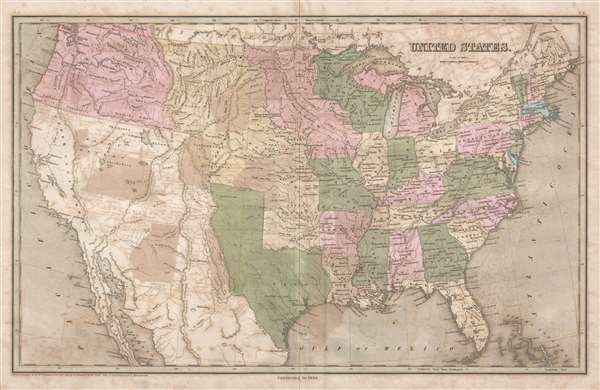 The United States on the cusp of the Mexican American War with unusual Texas pre-Comprimise of 1850 configuration.

This is the scarce 1846 Thomas G. Bradford map of the United States including Texas at its fullest. The map, published on the cusp of the Mexican-American War, depicts the country from the Pacific Ocean to the Atlantic Ocean and from Canada to Mexico. Two critical international border disputes are illustrated here: the disputed southern border between the newly-admitted State of Texas (Congress voted to annex Texas on December 29, 1845) and the 54°40' dispute in the Pacific Northwest concerning where the border between the United States and British Canada should be drawn.

Even before the 1845 Texas Annexation, an ongoing border dispute had been simmering between the Republic of Texas and Mexico. Texas claimed all land north and east of the Rio Grande to the U.S. border, then the Arkansas River, while Mexico believed the border lay at the Nueces River, a difference of nearly 200 miles. On most American maps, this dispute is illustrated with Texas occupying all of the disputed territory, a larger area than is shaded here, including Santa Fe and a panhandle extending into modern-day Wyoming. On Bradford's 1846 map of the United States, the border is illustrated significantly to the east of the Rio Grande (Rio del Norte) reflecting Mexico's c. 1814 New Mexico Territory. Bradford choice of this border is curious, but it suggests that he supported this border as the final solution to the border dispute, or maybe it was wishful thinking, hoping that a middle ground could be reached, and war could be avoided. The Mexican-American War (1846 – 1848), after all, was fought over this border dispute. Our research has been unable to uncover a definitive answer to this question.

The extension of the Pacific Northwest border of the United States beyond 49th parallel, which is the modern-day border between the United States and Canada, but rather at the parallel 54°40' north, instigated a much less violent dispute between the United Kingdom. The parallel 54°40' north at that time created the border with Russian America and is well into modern day British Columbia. The so-called 'Oregon Question' was disputed for decades and its basis was mostly economic. The fur trade in the Pacific Northwest at this point in history was booming, which meant that both British and American companies and citizens wanted access to this highly profitable resource. American interest also came back to the concept of Manifest Destiny and the Westward Expansion. Although the border was set at the 49th parallel by 1846 (as the manuscript notation in Washington State notes), the crisis was not fully resolved until 1872. A manuscript notation in red pen illustrates the U.S.-Canadian border extension along the 49th parallel and around Vancouver Island.

Numerous cities and towns throughout the United States are labeled, not only the state capitals. The soon-to-be-completed National Road is illustrated and stretched from Cumberland, Maryland to Vandalia, Illinois. It would eventually be extended to St. Louis. Myriad rivers snake their way across the country and all five Great Lakes are labeled. The bulk of the western United States (the Louisiana Purchase) is labeled simply 'Indian Territory' while everything south of Oregon is still a part of Mexico.

This map was published by Thomas Bradford in the 1846 edition of his Universal Illustrated Atlas.