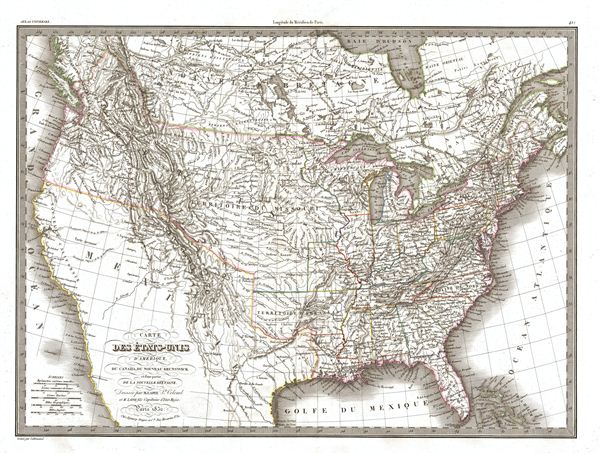 Important but little known map of the United States from the era of the Mountain Men.

Cartographically this map is most interesting for it embracive treatment of the Trans-Mississippi region – a rarity in a map of this era. This map was issued in the waning years of the era of the Mountain Men, post Louis and Clark fur traders who crossed the Rocky Mountains to exploit the fur riches of the Pacific Northwest. The mogul John Jacob Astor sent out one of the first expeditions to establish Fort Astoria on the Columbia River and thereby dominate the American Fur Trade. Few fur traders had the education or motivation to produce maps, but a few, such as Wilson Price Hunt, Robert Stuart, and Jedediah Smith, did make significant contributions to the cartographic corpus. Lapie must have had access to some of these early accounts, particularly Hunt's and Stuart's, which he could only have obtained from Astor himself, when he constructed his 1821 map of the Pacific Northwest on which this more inclusive later map is based.

Lapie's map generally follows the mappings of Louis and Clark in 1814 and the 1811 explorations of the Astorian furmen Wilson Price Hunt and Robert Stuart. The 'Tour de Pompey' or Pompey's Piller (Montana) where Louis and Clark split ways on the return journey is noted. The map ignores the explorations of Stephen Harriman Long around the Platte, Arkansas and Red River basins as well as the discoveries of Jedediah Smith beyond the Great Basin. The Great Basin itself exhibits cartography reminiscent of the escalante expedition with Great Salt Lake (L. Timpanagos) and Utah Lake (L. Teguayo) connecting to the Pacific via the speculative rivers Millers and Buenaventura. Lapie indicates the Santa Fe Trail from St. Louis to Santa Fe. No trace of the Sierra Nevada range is in evidence.

This map was engraved by Armand Joseph Lallemand as plate no. 43 in the first edition of M. Lapie's important Atlas Universel. This map, like all maps from the Atlas Universel features an embossed stamp from the Lapie firm.