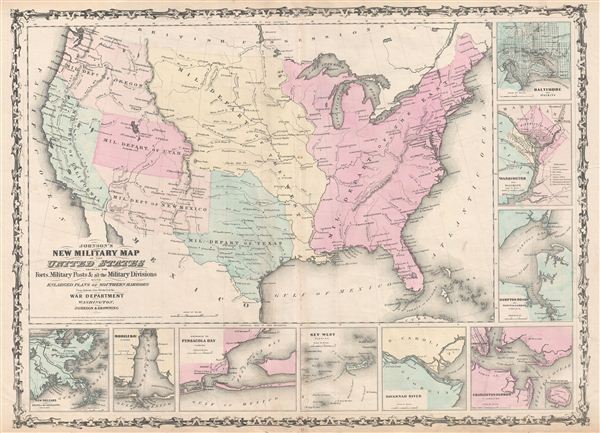 Among the most ephemeral of all Johnson Maps, appearing in just one edition of his atlas.

A scarce and underappreciated 1861 map by A. J. Johnson showing the military deportment of the United States in 1860, just prior to the outbreak of the American Civil War. The map covers the entire United States and is broken up into various military departments. The map is surrounded on two sides by inset plans of 'southern harbors.' Though the Civil War had not yet broken out when Johnson drew this map, tensions where high and his choice to include strategic southern within his 'Military Map' was clearly intended profit from a general sense of anticipation. Insets include, from top right, Baltimore, Washington and Vicinity, Hampton Roads, Charleston Harbor, the Savannah River, Key West, Pensacola Bay, Mobile Bay, and New Orleans.

Unlike most Johnson maps, this map is a fully independent production and was not inherited from the earlier work of Colton, nor was it included in the first edition (1860) of Johnson's Family Atlas. The map appeared in the second Johnson and Browning edition, 1861; though it is not assigned a page number nor does it appear in the general index of the Family Atlas. Most likely Johnson ordered this map drawn to capitalize on increased interest in the military deportment of the United States on the eve of the Civil War. This map was exceptionally ephemeral, reflecting the changing nature of the department system itself - the present example being the only issue to reflect a 7 department system. He later reissued the map with various completely new plates and 18 departments through 1863, before abandoning the concept entirely in favor of a state focused presentation. Johnson issued this map in the 1861 edition of his New Illustrated (Steel Plate) Family Atlas. This was the last edition of the Family Atlas to bear the 'Johnson and Browning' imprint.

Johnson, A. J., Johnson's New Illustrated (Steel Plate) Family Atlas of The World with Physical Geography, and with Descriptions Geographical, Statistical, and Historic including The Latest Federal Census, A Geographical Index, and a Chronological History of the Civil War in America, (New York) 1861. 404 Not Found

Laurie, v. 1.0.
Looking for a high-resolution scan of this?