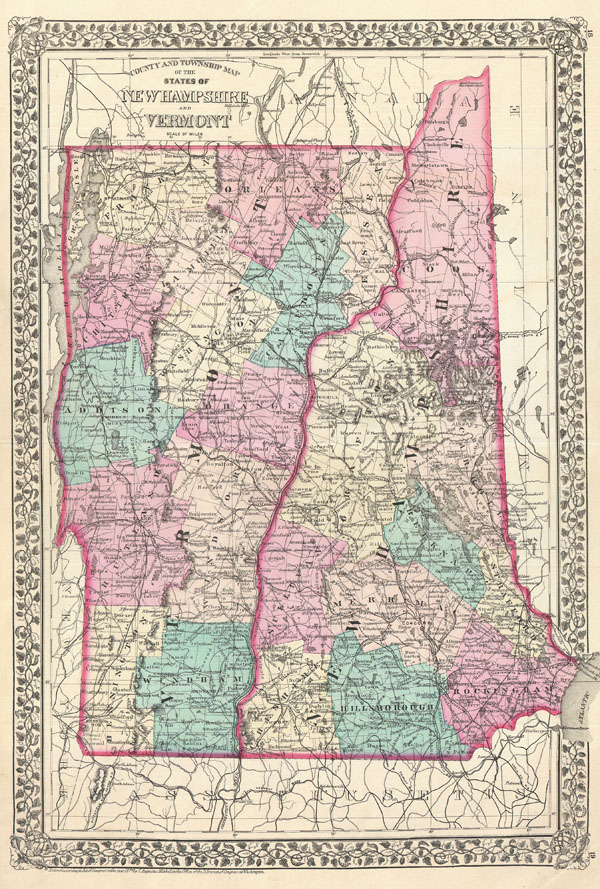 A beautiful example of S. A. Mitchell Jr.'s 1877 map of Vermont and New Hampshire. Denotes both political and geographical details. Divided according to counties and highlighted with Mitchell's typical pastels. One of the most attractive American atlas maps of this region to appear in the mid 19th century. Features the vine motif border typical of Mitchell maps from the 1866 - 1882 period. Prepared by S.A. Mitchell for inclusion as plate nos. 18 and 19 in the 1878 issue of Mitchell's New General Atlas. Dated and copyrighted, 'Entered according to Act of Congress in the Year 1877 by S. A. Mitchell in the Office of the Librarian of Congress at Washington.'

Mitchell's New General Atlas, containing Maps of the Various Countries of the World, Plans of Cities, Etc., Embraced in Fifty-three Quarto Maps, forming a series of Eighty-Four Map and Plans, together with Valuable Statistical Tables. (1878 Edition)