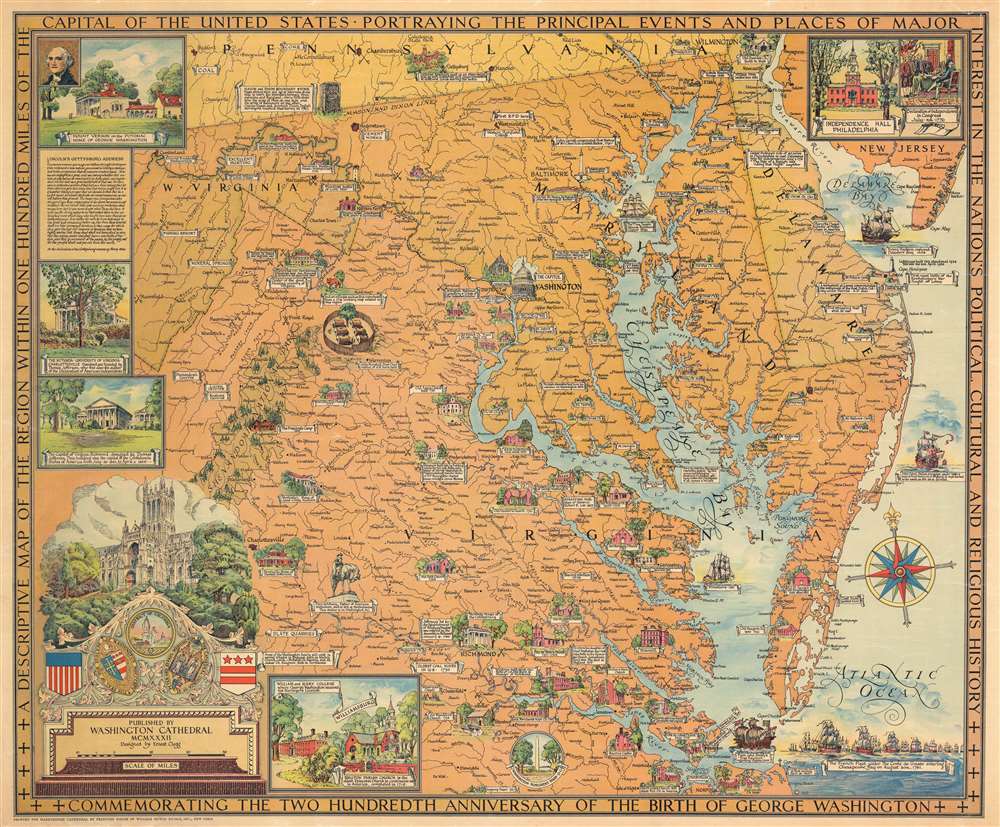 A Descriptive Map of the Region Within One Hundred Miles of the Capital of the United States Portraying the Principal Events and Places of Major Interest in the National Political, Cultural and Religious History Commemorating the Two Hundredth Anniversary of the Birth of George Washington.
1932 (dated)     28.25 x 34 in (71.755 x 86.36 cm)     1 : 500000

This is a 1932 Ernest Clegg pictorial map of Maryland, Delaware, and northern Virginia illustrating the vicinity of Washington, D.C and the Chesapeake Bay. The map depicts from Wilmington, Delaware south to Norfolk, Virginia. Publication of this map was sponsored by the Washington National Cathedral, as such pictorial views mark many of the area's churches. Other vignettes highlight important historical sites, including the Capital, Arlington National Cemetery, Monticello, the White House of the Confederacy in Richmond, and John Brown's Fort in Harper's Ferry. Crossed cavalry sabers identify American Civil War (1861 - 1865) battlefields, among them Gettysburg, Antietam, Bull Run, Shiloh, and The Wilderness. Natural sites are included as well, including Shenandoah National Park, mineral springs in West Virginia, and Caledonia State Park in Pennsylvania.

Views illustrating historical events adorn the borders. These include Independence Hall, the signing of the Declaration of Independence in Philadelphia, George Washington's home at Mount Vernon, the Rotunda at the University of Virginia, the Capital of Virginia in Richmond, the National Washington Cathedral, William and Mary College, the Washington Monument, and the Revolutionary War French Fleet arriving in the Chesapeake Bay.

This map was designed by Ernest Clegg and published by the Washington Cathedral in 1932. Two editions were issued simultaneously. One, the present example, was issued in full color. The other was uncolored, issued in just 200 examples, and intended for hand coloration by Clegg. Four examples of this map are cataloged in OCLC as part of the institutional collections at the Boston Public Library, Yale University, Harvard University, the Library of Congress, and the Buffalo and Erie County Public Library. Another example, part of the David Rumsey Map Collection, is partially hand-colored, suggesting that Clegg did not get far in his ambition to hand color all 200 - in fact, we have not identified any examples fully hand-colorized by Clegg.