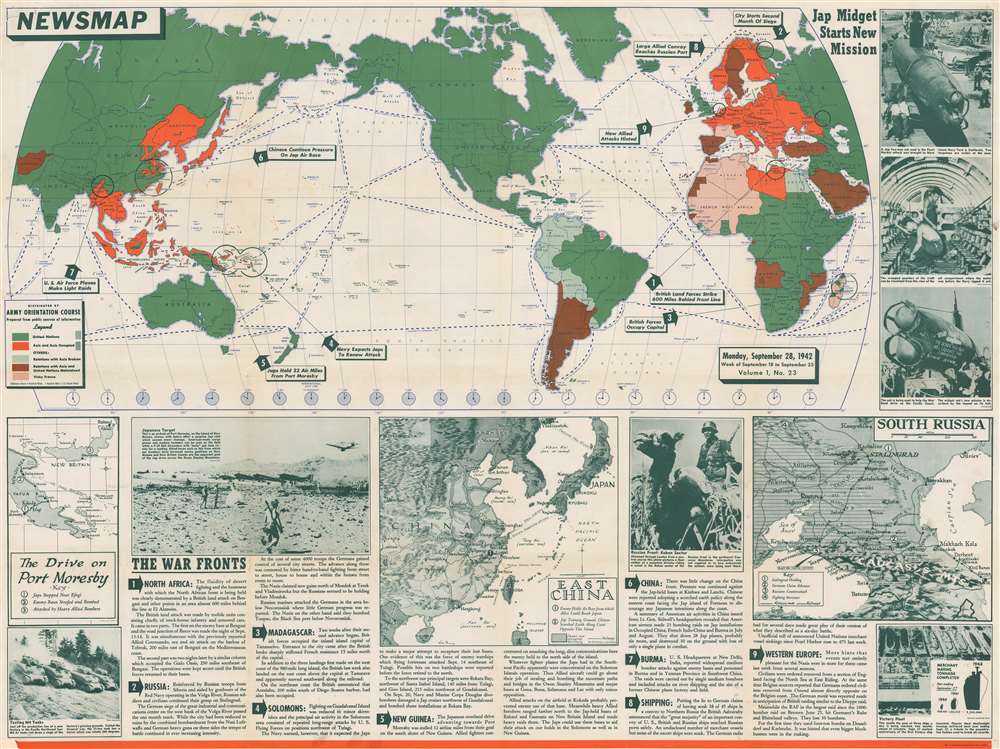 One of the earliest maps in the series, this is a 1942 Army Orientation Course Newsmap of the world. Nearly half of this fascinating piece is occupied by a map of the world, with the Americas at center, that uses color to illustrate how the world is divided between the Allied Powers and the Axis. Here, the orange marks 'Axis and Axis Occupied' territory, while the green marks the 'United Nations'. Nine war-related events that took place across the world are marked as well, with numbered arrows and captions informing the viewer what the event was, and a line and a circle indicating the general area where the event took place.

History As It Happened

It is important to remember that in late September 1942, when this map was published, World War II was far from over and the outcomes of many critical battles were still unknown. The beginning stages of two such battles, the Battle of Stalingrad and the Battle of Guadalcanal, are highlighted here. These battles raged for five and six months, respectively, and when this map was published the Allies had been on Guadalcanal for nearly two months and the siege at Stalingrad had just finished its first month.

Events on the War Fronts

As stated above, nine different events around the world are highlighted on this particular piece, not only Guadalcanal and Stalingrad. Other highlighted actions during this week took place in North Africa, Madagascar, New Guinea, and the Arctic Ocean. Small inset maps provide the viewer with a better understanding of some of these actions, such as the fighting on New Guinea and New Britain, where Allied troops stopped the Japanese advance on the critical port of Port Moresby only thirty-three miles from the city. Another inset map depicts eastern China and Taiwan (Formosa), while the third highlights the Caucasus in southern Russia where Stalingrad had just weathered the first month of the siege, which would last until February 2, 1943. Photographs are also interspersed among the maps and the information and present the viewer with M4 Sherman tanks going through testing, an Allied airfield at Port Moresby that had recently been bombed by the Japanese, and a German soldier riding a camel in the Caucasus. Interestingly, the caption here states that the photograph was received 'through London from a neutral source' and that it was unclear as to 'how extensively the animals were being used there'.

The photographs printed along the right side of the world map present the captured Japanese mini-submarine HA. 19 during her War Bonds tour. The submarine was part of the Japanese assault on Pearl Harbor on December 7, 1941, although it never succeeded in entering the harbor itself. Its gyrocompass broke that morning, and without it, the sub's crew beached their vessel three times on coral reefs before she was finally disabled by the USS Helm. Her crew's attempt to scuttle the sub failed, and, after a bombing raid dislodged her from yet another reef, she washed ashore, where the U.S. Navy disassembled her into three parts and took her back to Pearl for investigation. After the Navy was done with their investigation, HA. 19 was sent to California, where she was put on the back of a flatbed truck and used to help promote the sale of war bonds. By the time her tour was finished, she had visited 2,000 cities and towns in forty-one states. Today, HA. 19 is part of the collection at the National Museum of the Pacific War in Fredericksburg, Texas.