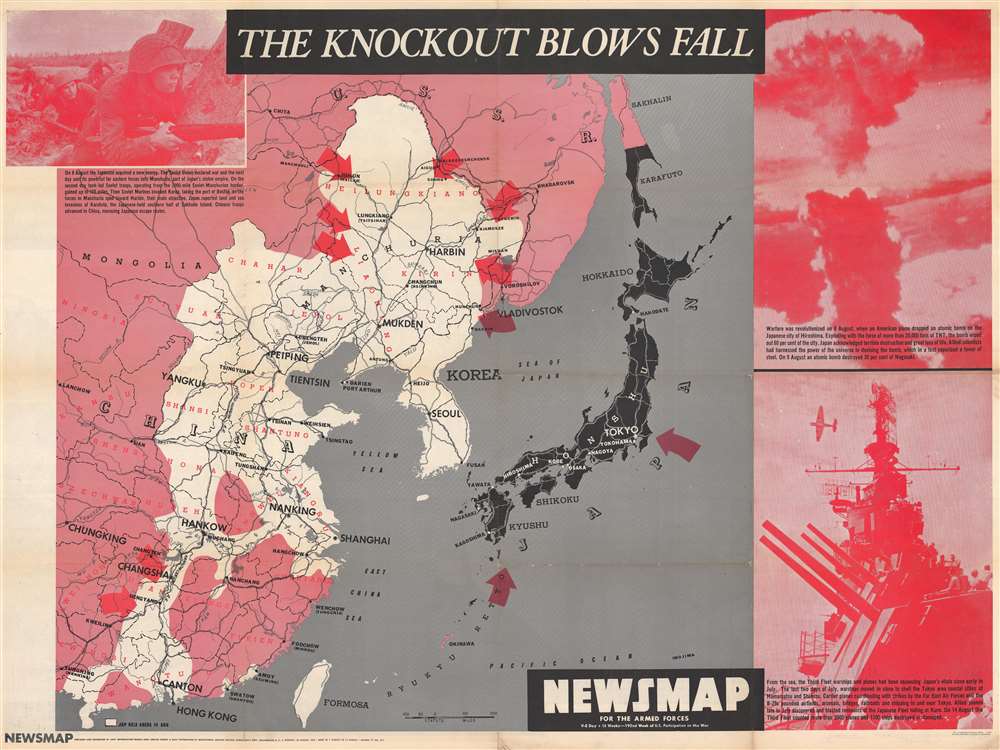 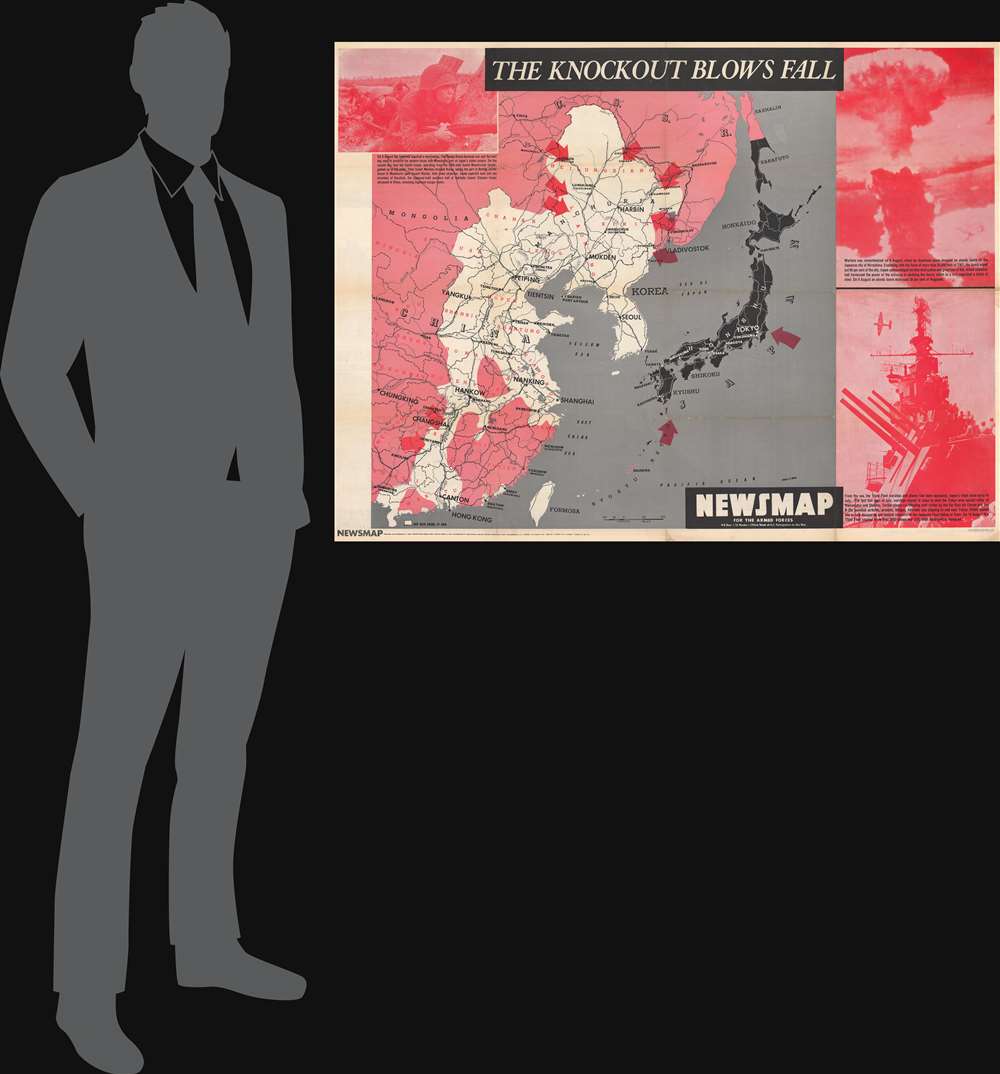 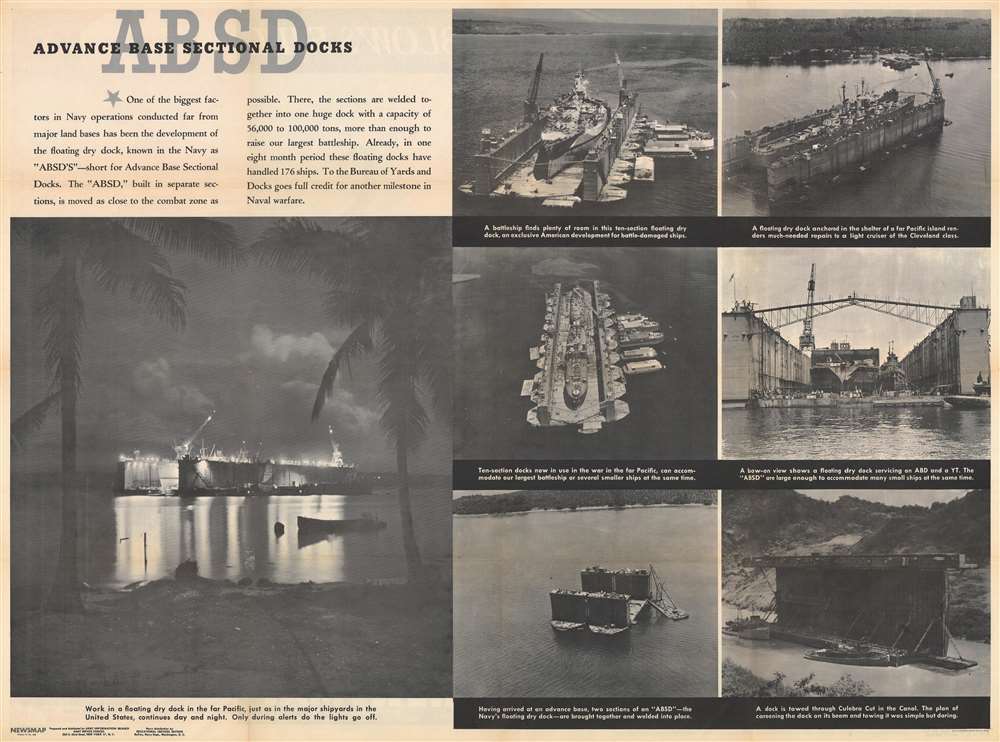 This is the chilling Atomic Bomb issue from the iconic World War II Newsmap series. Issued in 1945 as the 'Army Information Branch Newsmap of eastern China and Japan' shortly after the bombing of Hiroshima and Nagasaki, one week before the Japanese announced their surrender to the Allies to end the Pacific War, World War II.

The map depicts the region from central China and Mongolia to Japan and from the Soviet Union to Taiwan (Formosa) and Hong Kong. Red areas highlight the regions controlled by the Chinese nationalists led by Chiang Kai-shek and the Soviet Union with the white illustrating the Japan's ever-dwindling empire. Thick red arrows illustrate the directions of advance by the Chinese south of Hankow (Hankou), the Soviet Red Army in Manchuria and Karafuto, and the U.S. Navy in the western Pacific near Japan itself. A photograph in the upper left corner presents Soviet troops in combat against the Japanese, on whom the Soviets declared war on August 8th.

Mushroom Cloud: The Bombing of Hiroshima and Nagaskai

The photograph in the upper right corner has since become iconic and almost immediately recognizable as the mushroom cloud rising above Hiroshima following the atomic bombing of that city by the U.S. on August 6, 1945. The bottom photograph presents the deck guns of an American warship, although it is unclear which one, though it is likely a cruiser.

This map was created by the Army Information Branch and published on August 20, 1945. Ten examples are cataloged in OCLC and are part of the collections at Denison University, Ohio Wesleyan University, Davidson College, the Library of Michigan, the University of Wisconsin-Madison, Southern Illinois University at Edwardsville, the University of Missouri – Columbia, Wichita State University, the Denver Public Library and Texas A and M University.

Army Information Branch, NEWSMAP. Monday, 20 August, 1945. Week of 7 August to 14 August. Volume IV No. 18F.     Newsmaps were published weekly between April 1942 and March 1946. Their content usually featured world maps, short summaries of the week’s military action, and photographs of troops and materiel. Early Newsmaps were printed on one side only, but later in the war, they were printed on both sides, with the reverse bearing large-format maps, photographs, or other visual information. Several different versions of Newsmaps were produced: a large domestic version, a smaller overseas version, and an industrial version, which included more information about war production efforts.