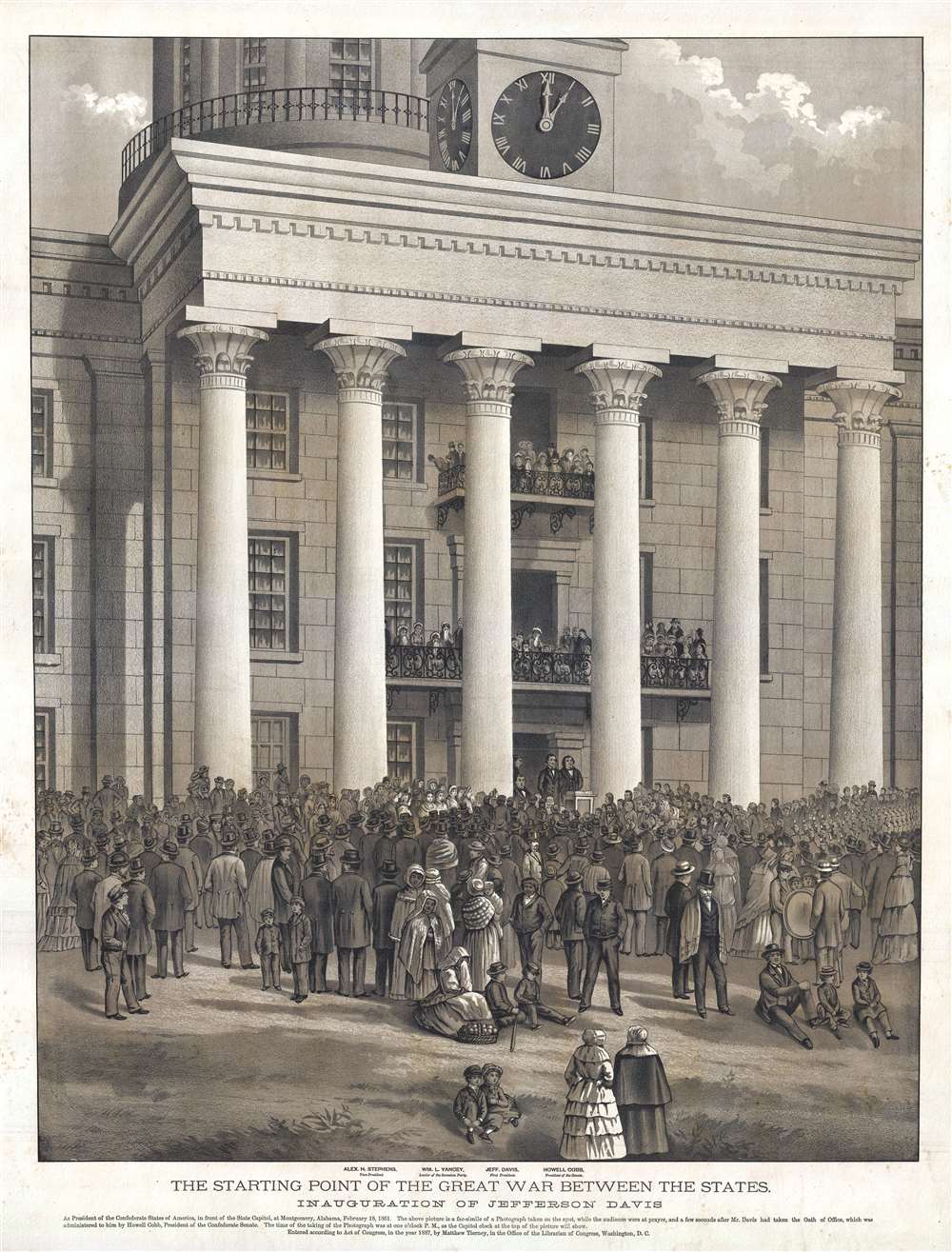 The most iconic image of the creation of the Confederate States of America.
$4,000.00

This is a rare 1887 Matthew Tierney view illustrating the inauguration of Jefferson Davis, president of the Confederacy, on February 18, 1861, at the capitol building in Montgomery, Alabama. This is one of the rarest and most iconic views of the birth of the Confederate States of America. It focuses on that pivotal moment, at 1PM, during a pause for prayer just after Davis accepted the oath of office, that the Confederacy was born. This moment is considered by some to be the true beginning of the American Civil War (1861 – 1865).

The view shows Davis' tall slender profile standing at center, in front of the doors of the Montgomery Alabama State Capitol. Before him is a Bible on which he has just sworn the Confederate oath of office. On the podium with him are Alex. H. Stephens, Vice President of the Confederacy; William L Yancey, leader of the Secessionist Party; and Howell Cobb, President of the Confederate Senate and administrator of the oath. On the lawn in front of the Capitol stand Confederate soldiers and prominent citizens, many finely dressed. Among them, according to photographic historian Frances Osborn Robb (Shot in Alabama: A History of Photography, 1839–1941, page 47.), the photographer's niece Toccoa Cozart.

Of note are the four African Americans featured prominently at center. All have turned away from the events, and one, sitting on the ground, weeps in despair. Robb suggests that the man is a livery driver, and the presence of the four young children in the foreground suggests the other three may be nannies. All four figures are present in the original photograph, but their features on less distinct – for example it is unclear if the seated figure is actually weeping. We think it more likely that the artist who eventually painted the view, James Massalon, may have been pro-south but nonetheless anti-slavery, much like Jefferson Davis himself, and sympathized with the plight of slaves.

The view is based on a remarkable photo taken of the event, copies of which survives to this day at the Alabama Department of Archives and History (LPP30, Box 1) and the Boston Athenaeum (A B71M766 Hi.1861). The photograph was taken by Archibald Crossland McIntyre (1832 – 1890), a shopkeeper, portraitist, and merchant of Montgomery, who advertised his view and two others in the Feb. 19, 1861 Montgomery Messenger. Of the three advertised photographs, only this photo survives. McIntyre's iconic image shortly thereafter, on March 9, appeared in Harper's Weekly and subsequently several other publications – none of which offered credit. MacIntyre describes his photograph in the Montgomery Messenger as a 'lasting and faithful memorial' of 'the most momentous event, the most splendid pageant, civic and military of modern times.' According to Robb, only two versions of the original photograph survive. (Robb, F. O., Shot in Alabama: A History of Photography, 1839–1941, page 47.).

Sometime in the late 1860s or possibly the early 1870s, the Confederate officer, Colonel William C. Howell, of Prattville, Autuga County, Alabama, commissioned the artist James Massalon (1825 – 1925) to produce an enormous 6' high painting based upon McIntyre's photograph. We suspect that by this point McIntyre's name had been forgotten, as no further credit is given to McIntyre and all subsequent printed versions of the view are based upon Massalon's painting. We have not been able to trace the original painting.

The earliest printed version Massalon's image is an 1878 chromolithograph copyrighted to by William C. Howell and James Massalon, printed in Cincinnati, Ohio by Strobridge and Company. The 1878 chromolithograph is the rarest of the views, with only 3 examples known. Nearly 10 years later, in 1887, two near identical two-color lithograph variants appear, both with the 1887 Matthew Tierney copyright: one with an August Hoen imprint, and the present example, with no printer identified. It is possible that Tierney acquired the rights to the view from Howell and Massalon, or, given that neither are credited in the present view, perhaps he stole the image. Unfortunately we have been unable to unearth anything of Matthew Tierney.

All examples of this view are rare. We have identified only one from the 1887 issued on the OCLC. There are no other known examples of the present state without the Hoen imprint.

Very good. Laid down on archival tissue. Blank on verso.
Looking for a high-resolution scan of this?