1863 Johnson Map of Washington and Oregon 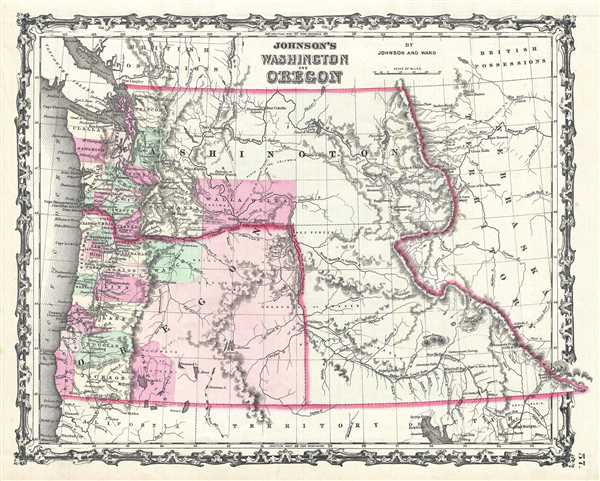 1863 Johnson Map of Washington and Oregon

Johnson's map of Washington and Oregon predating the formation of the Idaho Territory.

A beautiful example of Johnson and Ward's 1863 map of Washington and Oregon. This rare map offers a fascinating snapshot of this region shortly following the outbreak of the American Civil War. Shows the state of Oregon with much of its eastern regions unsurveyed. Washington is a massive territory extending eastward as far as the Rocky Mountains where it abuts Nebraska Territory. Most of the western regions of Washington Territory, what today includes parts of Idaho and Montana, are unexplored and dominated by various American Indian nations including the Snakes, the Pa-nacks, the Nez Perce, and others. Idaho Territory, formed the same year this map was issued, is not included here. Notes Fremont's 1843 route as well as the suggested route for the Pacific Railroad as proposed by Governor Stevens. Also notes geographical features including the Tetons, Mt. Rainer, Mt. Adams, Fremont's Peak and the Three Buttes. Features the strapwork style border common to Johnson's atlas work from 1860 to 1863. Published by Johnson and Ward as plate number 57 in the scarce 1863 edition of Johnson's Family Atlas.