1899 Gillam Political Cartoon Heralding the Construction of the Nicaragua Canal 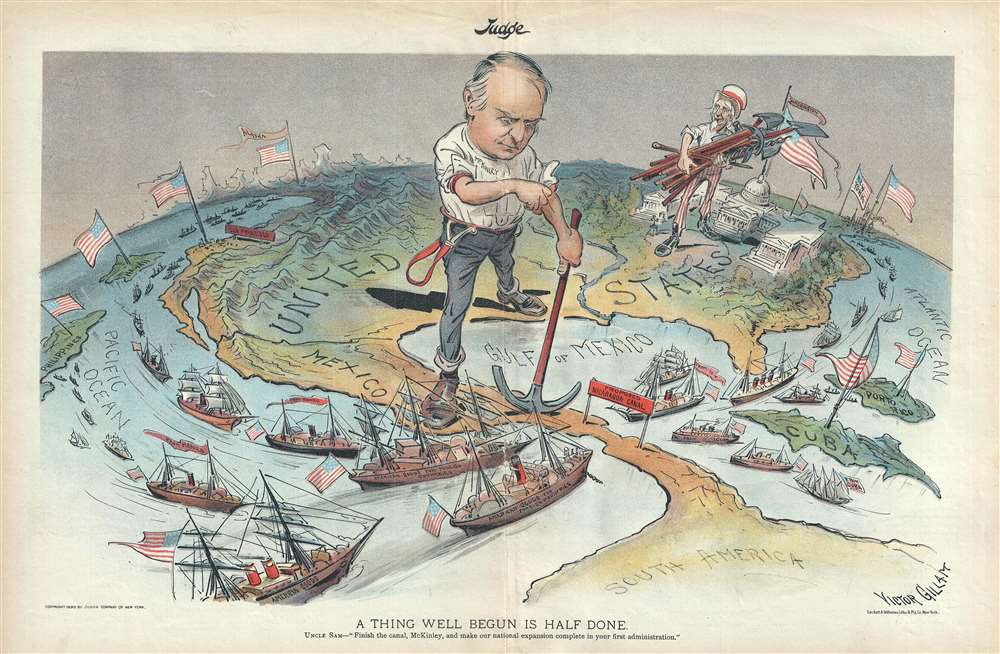 1899 Gillam Political Cartoon Heralding the Construction of the Nicaragua Canal

A political cartoon celebrating America's expansion across the globe, both in territory and through influence.

This is an 1899 Victor Gillam political cartoon heralding the inauguration of construction of the Nicaragua Canal. Illustrating most of the Western Hemisphere, Uncle Sam is quoted as saying 'Finish the canal, McKinley, and make our national expansion complete.' America's burgeoning empire is marked by the line of American flags in the Pacific, identifying the Philippines, Hawaii, and Alaska as American ground, along with the flags in Puerto Rico and Cuba, also under American influence by 1899.

The years around the turn of the 20th century saw the United States emerge onto the world stage. Although American expansionism had been national policy since well before the American Civil War, it was not until after the American victory in the Spanish-American War that the United States believed it was taken seriously in a global sense. Many politicians professed concern that America lacked an overseas empire, even though it had easily annexed Texas, northern California, Alaska, and Hawaii in recent history.

Americans had remained staunchly isolationist throughout their country's history, even in the face of American 'Manifest Destiny'. The Spanish-American War began to change the country's perspective, particularly following the cession of Guam, the Philippines, and Puerto Rico to the United States in the treaty ending that war. Cuba also became an American protectorate.

The new atmosphere of global importance influenced the United States into appointing an Isthmian Canal Commission to determine the best route for a canal across Central America. As a French company had already claimed the route through Panama, it was determined that a canal across Nicaragua was the best option for the United States. Soon, however, the French company folded, and the U.S. managed to gain possession of the Panamanian route and quickly moved their operation to that site. American eagerness to complete the canal, and ease commerce between the East Coast (represented here by Washington, D.C. and New York) and the West Coast (San Francisco), is personified by Uncle Sam bringing McKinley an armful of tools to help him complete the task of building the canal. Enthusiasm for the project is also illustrated by the line of ships streaming toward the 'proposed Nicaragua Canal' from both coasts, merchants eager to avoid the perilous voyage around Cape Horn or the costly and time-consuming cross-country trip by rail for stagecoach.

This wonderful cartoon was created by Victor Gillam and published in the October 7, 1899 issue of Judge magazine.

Gillam, V. 'A Thing Well Begun is Half Done.' Judge Vo. 37 No. 938, October 7, 1899 (New York: Judge Publishing Company).     Judge (1881 - 1947) was a weekly satirical magazine published in the United States. The first issue was first printed on October 29, 1881 and was only sixteen pages long. Judge was launched by James Albert Wales, Frank Tousey, and George H. Jessop, who had previously worked for its rival magazine Puck. In the mid-1880s, William J. Arkell purchased the magazine, which was having difficulty competing with Puck. Arkell, taking advantage of his considerable wealth, persuaded cartoonists Eugene Zimmermann and Bernhard Gillam to leave Puck and join the staff at Judge. As Arkell was a supporter of the Republican Party, Judge soon became a platform for criticizing the Democratic administration of Grover Cleveland, which was blamed for the Panic of 1893, among other issues. With support from the Republican Party, Judge saw a rise in popularity during the 1880s and 90s, surpassing Puck in both content and circulation. Judge also widely supported the candidacy of William McKinley, largely through the work of cartoonists Victor Gillam and Grant E. Hamilton. Judge reached its peak circulation of around 100,000 by 1912. One of its former editors, Harold Ross, used his experience at the magazine to launch his own publication, The New Yorker in 1925, which quickly began to compete with Judge. Due to the success of The New Yorker and the Great Depression, Judge became a monthly is 1932 and ceased circulation in 1947.