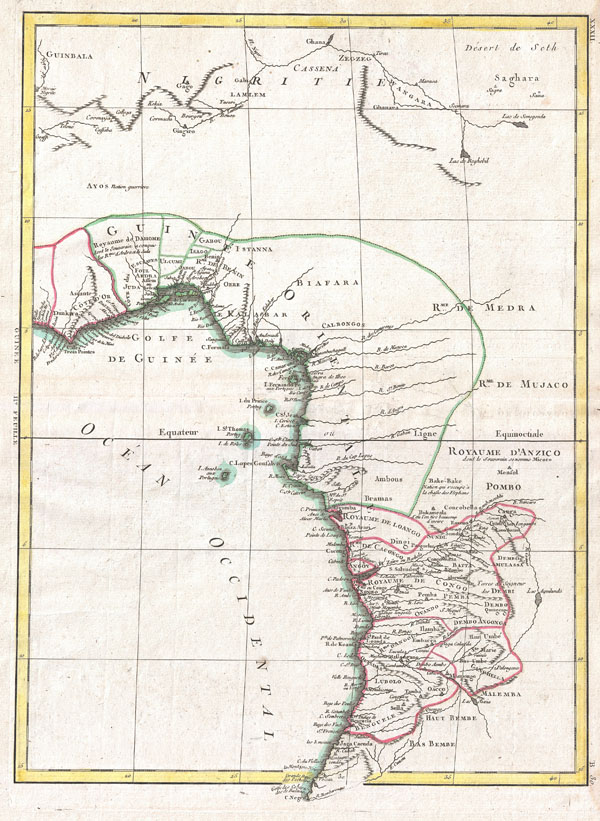 A beautiful example of Rigobert Bonne's 1770 decorative map of West Africa. Covers from the Gold Coast (modern day Ghana), south around the Bight of Benin (Biafara) to Gabon, Congo and Angola. Includes the modern day countries of Ghana, Togo, Benin, Nigeria, Cameroon, Equatorial Guinea, Gabon, Congo and Angola. As with most maps of Africa, this map shows excellent detail along the coast and only speculation in the interior. Give evidence of significant Belgian mapping activities throughout the Congo. Names numerous African Kingdoms including Anzico, Mujaco, Bembe, Lubolo, Pemba, Dembi, Calbongo, Bake-Bake, Benin and others. Attempts to map the Niger River as to flows into the 'Desert de Seth' or Saghara, but most of this cartography is speculative at best. Drawn by R. Bonne in 1770 for issue as plate no. B 30 in Jean Lattre's 1776 issue of the Atlas Moderne.