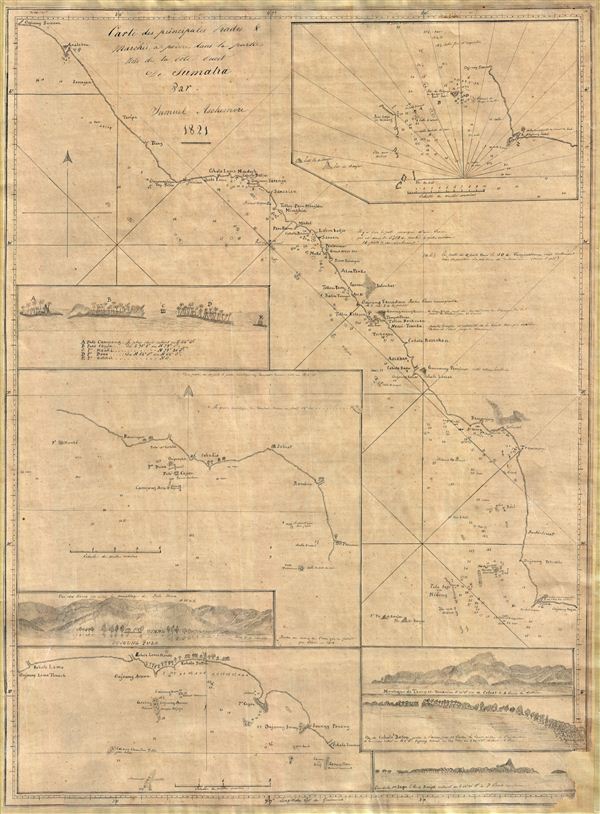 Drawn by Australian-Irish sea captain Samuel Ashmore, this important and one of a kind 1821 manuscript (hand drawn) nautical chart or maritime map is the first accurate depiction of the pepper ports of northwestern Sumatra, modern day Aceh. The map covers the coast of Sumatra roughly from the pepper port of Analabou (Arongan Lambalek) to Singkil, a region often referred to as the 'Pepper Coast.' The chart features three inset maps and four inset coastal views. The largest of these, center right, focus on the area around the island harbor of Touroumang (Troumon), the largest exporter of pepper in the region and Pulo Doua (Dooa Harbour), which Horsburgh considerers 'the best among the Northern pepper Ports.' A second inset, in the upper right quadrant, details the dangerous reef-ridden passage between Singkil and Pulo Sago (Banyak Islands). A third inset, in the lower left quadrant, focuses on the pepper rich coast to the east of Cape Felix, including Kohala Batou (Kuala Batu) - a particularly hostile pepper port and site of American military activity in 1831.

This region became exceptionally important with the breakout of the Padri War in 1803. The Padri War, fought between local chieftains of northwestern Sumatra following Adat law and Muslim clerics who, inspired by Wahabism after returning from Hajj, sought to convert the region to Sharia, or traditional Islamic law. Meanwhile, the colonial powers of the region, england and Holland, had tentatively agreed to dual spheres of influence, with england controlling Singapore, and the Dutch dominating Java and Sumatra. Dutch hegemony in Sumatra was nominal at best, being largely confined to the eastern portions of the island facing regional capital at Malacca (Melaka) located just across the Malacca Strait. The Padri War further frustrated Dutch attempts to control the island and its important pepper trade. At the same time, the lack of Dutch oversight opened the pepper ports of northwestern Sumatra, most of which are noted here, to foreign trade. Merchants from Australia, India, and the United States were thus able to circumvent the Dutch monopoly on pepper by trading directly with Sumatran producers. Ashmore, a merchant captain operating out of Sydney was among the first to accurately map this important stretch of coast - this is his original manuscript. This map was later integrated into the important large scale nautical charts of this region compiled and published by James Horsburgh, with whom Ashmore was acquainted.

even with Ashmore's excellent nautical chart, the pepper trade was dangerous. The Padri War, while hardly disrupting the pepper supply, displaced part of the local population and led to a spike in piracy all along the coast. Moreover, the powerful British and Dutch navies were actively discouraging any trade that disrupted their lucrative pepper monopoly. Nonetheless, Australians out of Sydney and Americans out of Salem swarmed to western Sumatra - some acquired great wealth though others suffered a more grisly fate. Just 10 years after this map was drawn, in 1831, an American pepper merchant ship, the Friendship, was stormed and its crew killed by Muslim villagers living in Kuala Batu (inset no. 3). The American president, Andrew Jackson, sent 300 marines and the frigate Potomac to 'chastise' the locals. Nearly 150 Malay pirates/villagers were killed. More recently this coast was devastated by the 2004 tsunami.

Being a one of a kind manuscript there are few references to this chart, however, we did find one. An english version of this chart, entitled The Northern Pepper Ports, on the west Coast of Sumatra, by Samuel Ashmore, 1821 was recorded in 1878 in the manuscript archives of the British India Office. According to the same archive reference, James Horsburgh republished this chart in 1822, though we have been able to identify no extant examples. The fact that the map is in French is also a matter of some curiosity and we can only assume that Ashmore or an assistant must have prepared this French version for a friend. This is a once in a lifetime opportunity.

Samuel Ashmore (August 5, 1787 - March 31, 1858) was an Irish mercantile captain active in Australia, Southeast Asia, and the East Indies in the early part of the 19th century. Ashmore was born in Dublin, Ireland and immigrated to Sydney, Australia in his early 20s. He was among the first Europeans to map a practical route through the dangerous Torres Straits between Australia and New Guinea. In 1810 and 1811, as Captain of the brig Hibernia traveling between Fiji and India, he discovered and named the Ashmore Islands and the Hibernia Reef, located between Australia and Indonesia. He was a friend and associate of the extremely important hydrographer James Horsburgh, many of whose influential nautical maps are based on manuscript work prepared en voyage by Ashmore, especially those focusing on Java, Sumatra, and the former Dutch East Indies (Indonesia). His name is scattered throughout Horsburgh's seminal India Directory. In Sydney's Nautical Magazine Captian Ashmore is described as

an indefatigable and accurate observer of all which pertained to his profession, [who] omitted no opportunity of making new discoveries in unknown or little frequented localities, or of correctly ascertaining and establishing the position of dangers previously doubtful…

After retiring from the sea, Ashmore worked in and around Sydney, Australia as a marine surveyor with the Australian General Assurance Company. His death, at 71 years, was considered to be an Australian national disaster for which all of the ships in Sydney Harbor few their flags at half-mast. Learn More...