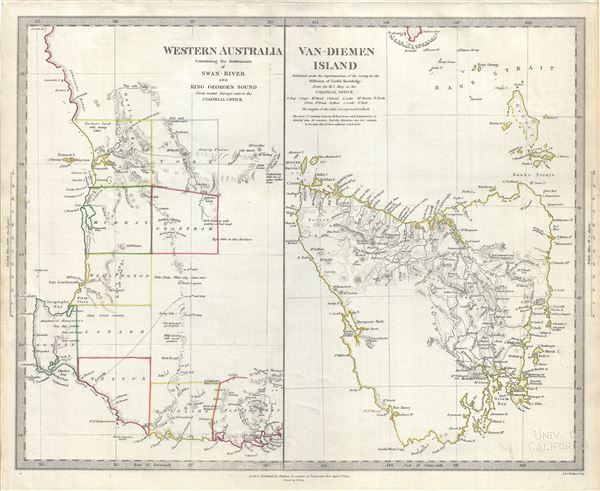 This is a scarce and beautiful 1833 Society for the Diffusion of Useful Knowledge or S.D.U.K.'s historic map of Western Australia and Tasmania or Van Diemen's Land. Essentially two maps on one sheet, the leftmost map details southwest Western Australia from Jurien Bay south to Albany and King George Sound. This map records the early settlements of the United Kingdom in the western part of Australia. It notes numerous counties, roadways, geographical features, and more.

The Swan River Colony including Perth was settled by the British in 1829, just four years before this map was drawn. York, noted here, was the first inland settlement by the British in 1831. Albany with King George Sound, along with its surrounding areas was called Plantagenet, supposedly named so because King George, the reigning British monarch at the time, believed that he was related to the Plantagenet lineage of kings, who ruled many centuries earlier.

The right hand map is a large detail of Van Diemen's Island or Tasmania. This map offers a significant update from previous editions and incorporates the results of numerous expeditions into the interior, an updated county system, and reveals an increasingly sophisticated internal road system. As this map was printed Tasmania was being aggressively colonized as a Penal Colony under the name 'Van Diemen's Land,' referring to the Dutch East India Company governor who sponsored Tasman's historic 1642 discovery of the island. The genocide of the Tasman aboriginal population reached its tragic conclusion in 1835, and the few reaming full blooded aborigines were transported to the 'sanctuary' of Flinder's Island. This is one of the few published maps of Tasmania from this period and an important record of the early development of the colony. A cornerstone map for any serious Tasmania collection.

Very good. Bears University of California Library Stamp, from which it was deaccessioned, in margin. Blank on verso.
Looking for a high-resolution scan of this?