1754 Gabriel Ramirez Map of the World in Hemispheres 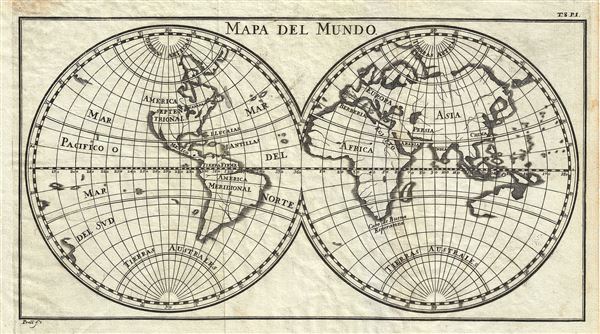 1754 Gabriel Ramirez Map of the World in Hemispheres

This is a scarce 1754 map of the World in two hemispheres by Gabriel Ramirez. It covers the western and eastern hemispheres and depicts the world as it was understood in the middle part of the 18th century, before the explorations of Cook, Wilkes, and others. The map names the continents of Asia, Europe, Africa, North America and South America with limited inland detail. Major rivers are noted, though most are speculative.

This map is interesting for its treatment of the western coast of America, the Pacific, and more importantly, Australia. This map was issued during a dark period in Australian exploration, the seventy-some years between the navigations of William Dampier in 1699 and Tobias Furneaux in 1773. Consequently most of the cartographic information on this map dates to 17th century Dutch expeditions to Australia's western coast, such as those of Abel Tasman and William Janszoon. Consequently we see a very ephemeral speculative mapping of the continent with its eastern coast unknown. In Asia, Japan is attached to the Asian mainland.