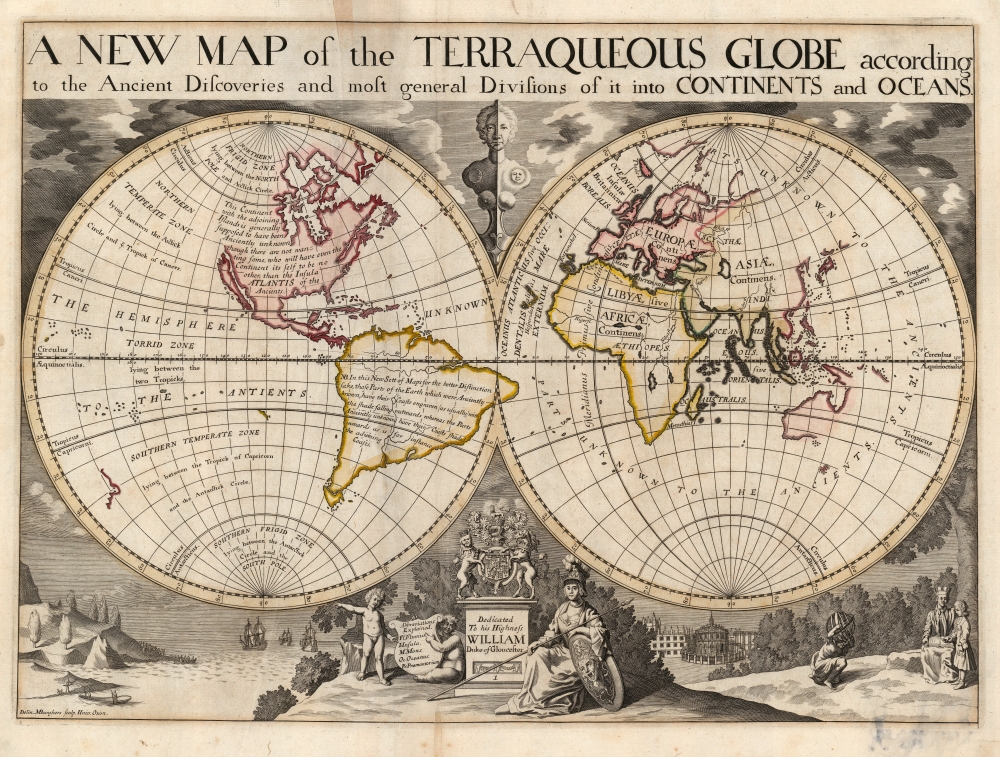 This is Edward Wells' 1700 map of the world, showing those parts of the world that were known to classical geographers and those which were more recently revealed during the Discovery era. The map was the first plate of Wells' A New Sett of Maps both of Ancient and Present Geography, and bore Wells' dedication of the work to his erstwhile student Prince William (Queen Anne's son, who would die in 1700 just prior to the atlas's publication). The map presents the world on a double hemispherical projection, with an attractive decorative border executed in a clear and simple style.

In order to differentiate those areas known to the ancient world from those more recently revealed, Wells employs a novel hachure system elucidated in a text filling South America:

In this New Sett of Maps for the better Distinction sake, those Parts of the Earth which were Anciently known, have their Coasts engraven (as usually) with the shade falling outwards whereas the Parts Anciently unknown have their Coasts shaded inwards as is for instance the adjoining Coasts.

The map shows, in general form, the state of the art of geography at the dawn of the 18th century. California appears in insular form. Australia and New Zealand follow Abel Tasman's discoveries. The incomplete northeast coastline of Asia indicates that those areas were not only 'unknown to the ancients' (as the map's text indicates,) but to 'moderns' as well.

A fascinating descriptive text in the body of North America reads:

This Continent with the adjoining Islands is generally supposed to have been Anciently unknown though there are not wanting some, who will have even the Continent its self to be no other, than the Insula ATLANTIS of the Ancients.

At the top and center of the map, a stylized and cleverly-shaded bust representing Day and Night gazes at the reader from a break in the clouds. At the bottom center is a dedicatory cartouche surmounted by the arms of the Dedicatee, the unfortunate Prince William. To the left, two putti point out explanations of the abbreviations used and to the right a matronly Athena sits with a spear across her knee and arm rested on her gorgon-headed shield. In the lower left is a scene of European sailors forcing their way onto a forbidding and temptingly empty coastline. In a considerably cozier scene to the right, a tutor and his student under a tree - perhaps Wells and the Prince himself - consult a text and an armillary sphere. Oxford's Radcliffe Camera fills the background.

This map was prepared for inclusion in Wells' 1700 A New Sett of Maps both of Ancient and Present Geography. This student atlas was successful and stayed in publication for many years thereafter. This example is of the second state identified by Shirley, with the plate number '1' engraved on the dedicatory plinth at the bottom center. This state of the map appeared in the 1726 and 1738 atlas editions. There are approximately twenty examples of this map catalogued in institutional collections, but this number may be inaccurate as both world maps of Wells' atlas bore the same title, and thus the two are poorly differentiated in library catalog descriptions.


Michael Burghers (1647? - 1727) was an Amsterdam-born English engraver active in Oxford, regarded by contemporaries as 'the best general engraver in England.' He produced plates for Robert Plot, Edmund Gibson, and in particular a number of maps for Edmund Wells' A new sett of maps... among other works. He was baptized a Lutheran in Amsterdam in 1648, but by 1673 had established himself in Oxford. He was naturalized in 1685 and became official engraver for Oxford University in 1694. Learn More...