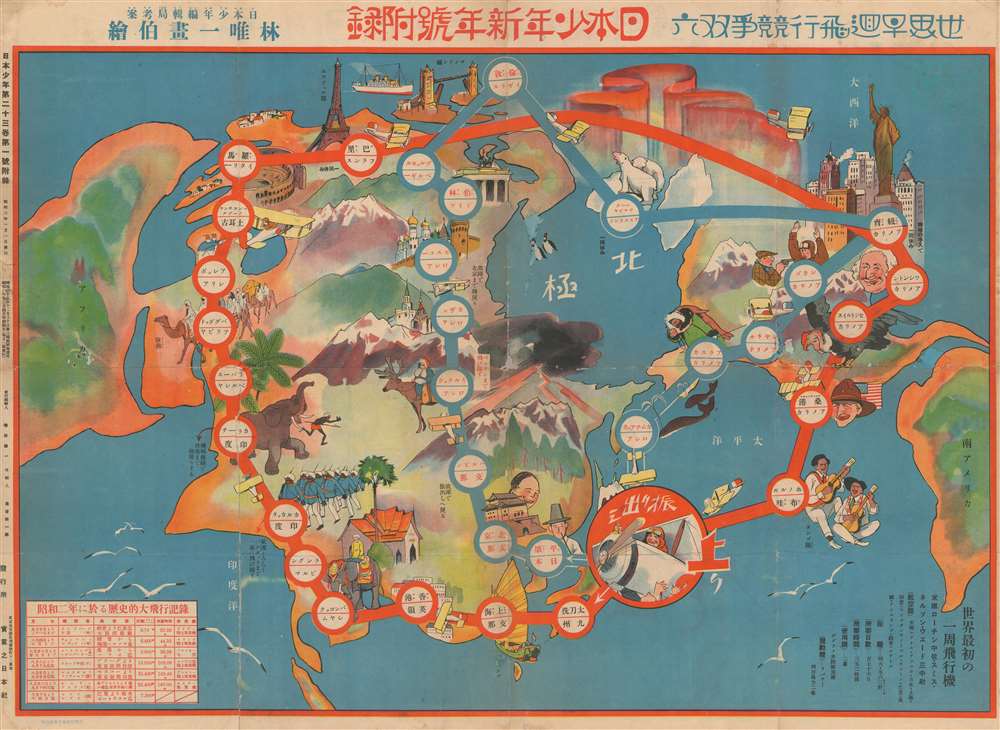 A rare Showa 2 or 1927 aviation-themed Japanese sugoroku'round the world' gameboard and map. Intended for Japanese youth, the game takes the form of a world map, with Japan at center, placing the formally isolated nation in a global context - a message not lost on the youth of Japan, who soon would be soldiers in an imperial army bent on conquest. The map is drawn on an unusual polar projection with an iceless North Pole at center surrounded by Europe, Asia, an Africa on the left, and the North and South America on the right. Unlike most sugoroku games, here the starting point, the furi-dashi, and end point, the agari, are the same, Tokyo. Players can choose two routes, the more northerly blue path, and a southernly red path. Both routes pass through New York City, symbolized by the Statue of Liberty, as a midpoint.

Japan Finds a Place on the Global Stage

This game map illustrates Japan's emergence from an insular feudal nation to a rising power on the world's social, military, and economic stage. The arrival of Commodore Perry and forced opening of Japan in 1853 transformed Japan's vision of itself, breaking the illusion that it was the sole repository of civilization, and underscoring the truth that it was indeed well behind western powers. What followed was the Meiji Restoration, a major reorganization of government, a reassertion of imperial power, and a drive towards aggressive industrial and social modernization. Japan's victory over Imperial Russia in the Russo-Japanese War (1904 - 1905) marked the first major victory in war by an Asian power over a European Power, an achievement that established Japan as a global power.

This map was printed on December 4 of Showa 2, or 1927. It was issued by Nihon Shonen, a Japanese youth magazine as a New Year's Supplement.

Jitsugyo no Nihon (株式会社実業之日本社, June 10, 1897 - 1931), roughly translating to 'Business Japan' was a Japanese magazine publisher active in Tokyo from the late Meiji, throughout the Showa, into the early Taisho Era. The firm was founded in 1897 as Dainihon Jitsugyo Gakkai but reformed in 1900 by Masuda Yoshikazu as Jitsugyō no Nihon Sha, Ltd. The publisher expanded rapidly, launching multiple publications. Among them were magazines geared towards Japanese youth, the Nihon Shonen, literally 'Japanese Boys', and Fujin Sekai or 'Woman's World', both of which issued Manga maps and gameboards. Jitsugyo no Nihon continued after 1931, even to the present day, but by this time had reorganized their business and dramatically transformed their operations to support the Pacific War.

Average. Multiple verso repairs, backed on archival tissue. Some loss at fold intersections, reinstated on verso. Price reflects condition.
Looking for a high-resolution scan of this?