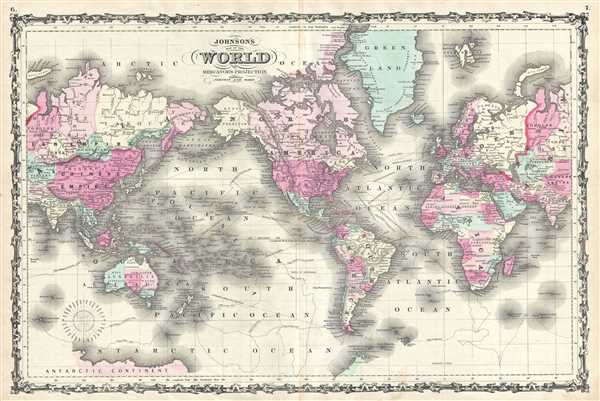 Johnson's early map of the World with exploration routes.

This is A. J. Johnson's fine 1861 map of the world on Mercator's Projection. It depicts the entire world centered on the Americas. Offering a fascinating snapshot of the world during a period of rapid globalization and discovery, this map depicts the entire world centered on the Americas. Africa is largely 'unexplored' and both Lake Victoria and Lake Tanganyika have yet to appear. The Antarctic continent is shown only embryonically, representing the relatively primitive state of Antarctic exploration in 1861. The routes taken by various important explorers, including Cook, Wilkes (U.S. exploring expedition) and others are noted. The map also identifies important shipping and nautical routes between America and Europe as well as the path of the Atlantic Telegraph Cable. Features the strapwork border common to Johnson's atlas maps from 1860 to 1863. Published by A. J. Johnson and R. Browning as plate nos. 6-7 in the 1861 edition of Johnson's New Illustrated Family Atlas. This is the last edition of the Johnson Atlas to bear the 'Johnson and Browning' imprint. Subsequent editions reflect Ward's 1862 acquisition Ross C. Browning's shares in the firm.