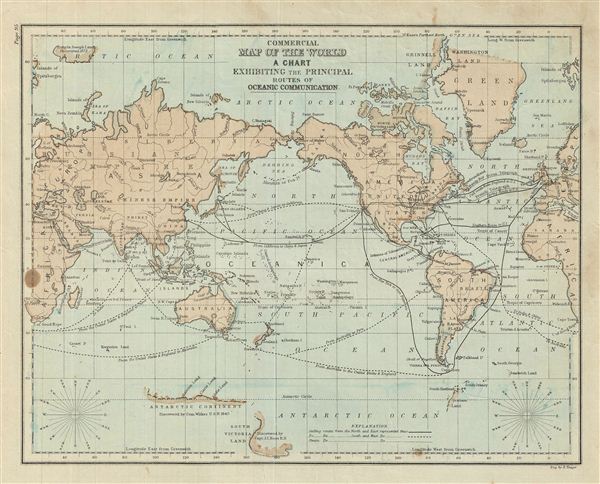 This is an example of David M. Warren's 1879 map of the World with a chart showing the principal routes of oceanic communication. Centered on the Bering Strait, it covers the entire world. Although countries and major cities are labeled, political distinctions are not. Francis Joseph Land, discovered in 1873 is identified. Antarctica, only tenuously denoted, reflecting the primitive state of exploration in the region, is noted as 'discovered by Com. Wilkes U.S.N. 2840.' A wind rose in each of the lower left and right quadrants is included. Various commercial sea routes are marked and gold regions in Australia and California are noted. Throughout, the map identifies various cities, towns, rivers, islands and an assortment of additional topographical details. The map is color coded according to regional and political boundaries with elevation rendered by hachure. Issued as page 95 in the 1879 edition of Warren's Common-School Geography.