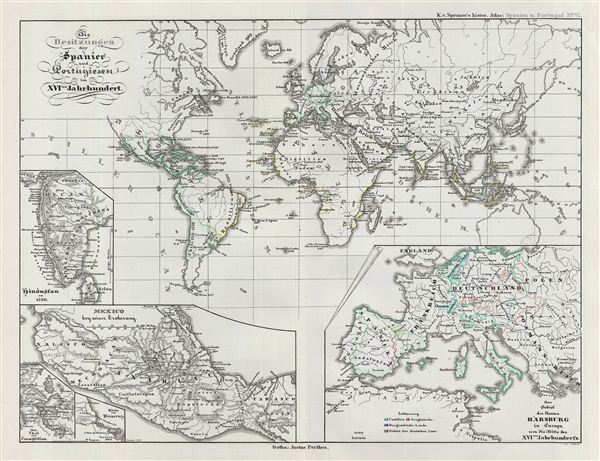 This is Karl von Spruner's 1854 historical map of the world detailing the possessions of the Spaniards and the Portuguese in the 16th century. The map covers the entire world with Spanish and Portuguese territorial boundaries outlined in color. Five inset maps, one on the left center margin, three in the bottom left corner, and one in the bottom right corner detail India in 1520, Mexico (the valley of Tenochtitlan and the coast of Vera Cruz), and royal claims of the House of Habsburg in europe by the middle of the 16th century. The navigation and commercial enterprise of the Spanish and Portuguese from the 14th through the 19th centuries led to global territorial and trading empires that spanned five continents. The whole is rendered in finely engraved detail exhibiting throughout the fine craftsmanship of the Perthes firm. Prepared by Karl Spruner for publication as plate S VI in the second edition of Justus Perthes' 1854 Historich-Geographischer, Hand-Atlas zur Geschichte der Staaten europa's vom Anfang des Mittelalters bis auf die Neueste Zeit.