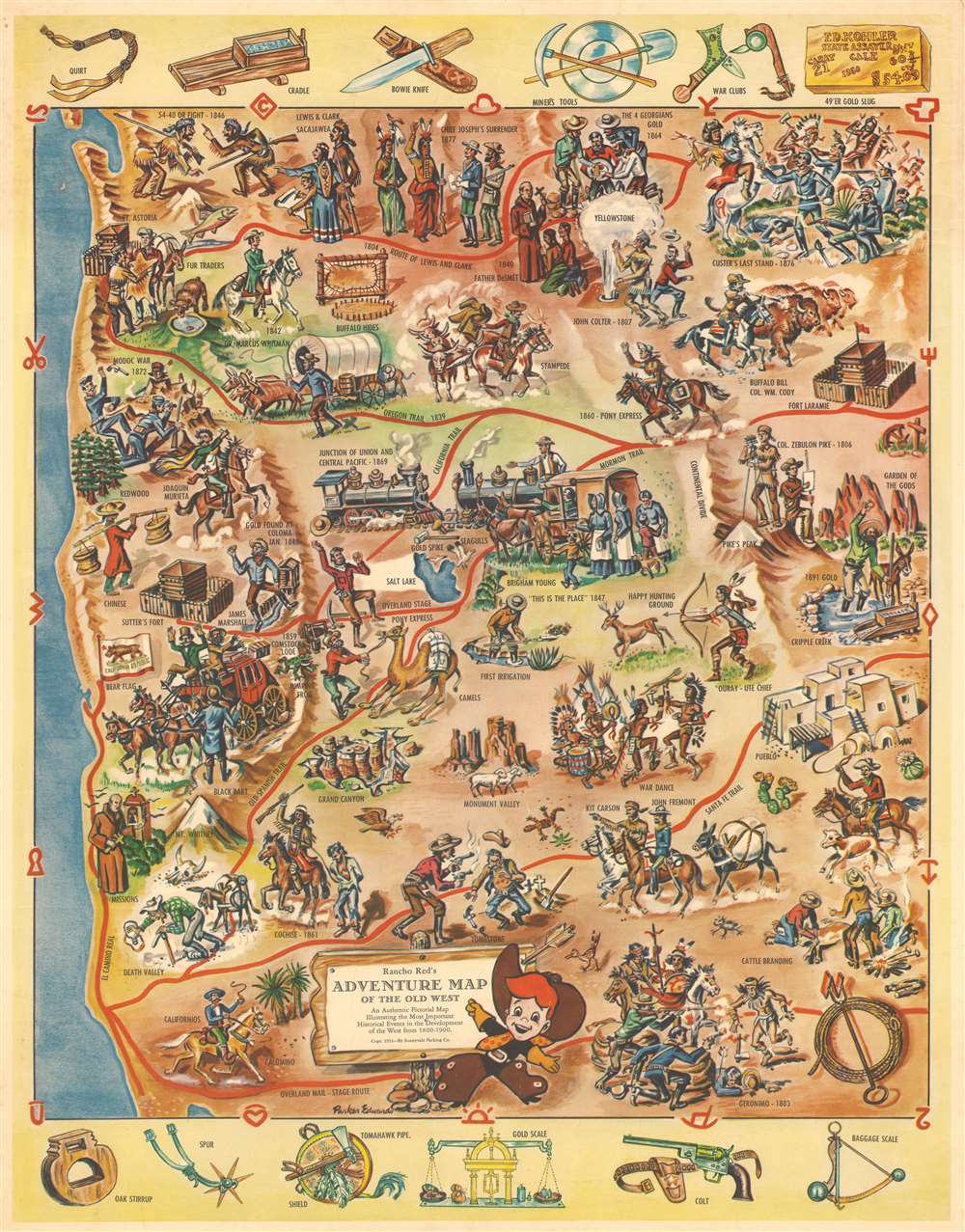 The only known example of a pictorial map romanticizing and chronicling life in the Old West.

Romanticized vignettes of life in the American West, along with illustrations of historical events, provide a narrative of adventure, danger, exploration, fortune hunting, and war during one hundred years of American expansion to this extremely rare 1951 Parker Edwards pictorial map. The map depicts the Old West from the Pacific Ocean to Wyoming, Colorado, and New Mexico and from Canada to the U.S.-Mexico border. Cowboys, perhaps the most romanticized piece of lore associated with the American West, are drawn evading stampeding cattle in one part of the map, while in another they are roping and branding calves. Lawmen and outlaws are seen in a shootout at Tombstone, Arizona, but Black Bart, the outlaw known for robbing stagecoaches in northern California and southern Oregon, illustrated doing just that. Native Americans, the other half of the 'Cowboys and Indians' game children play to this day, are present as well. Some are shown in the middle of a war dance, while Chief Ouray of the Utes is hunting deer in the 'happy hunting ground'.

Native Americans also appear in several of the historical events highlighted in these vignettes. Sacagawea is included guiding Lewis and Clark on their historic expedition, as are the Lakota and the other tribes exacting their revenge on Lieutenant Colonel George Armstrong Custer and the U.S. 7th Cavalry at the Battle of Little Bighorn. The great warriors Chief Cochise and Geronimo are also referenced. Gold rushes in California and Colorado are noted, with James Marshall illustrated as Sutter's Mill, the site of the beginning of the California Gold Rush. The natural beauty of the West is also on display, with illustrations of the Grand Canyon and Monument Valley appearing in Arizona and Old Faithful marks Yellowstone in Wyoming. Other prominent figures and events in the history of the American West illustrated here include Colonel William 'Buffalo Bill' Cody, Kit Carson, and John Fremont, along with the completion of the transcontinental railroad, the Pony Express, and the Oregon Trail. Illustrations of objects important to life in the Old West, including stirrups, spurs, a Colt pistol, a Bowie knife, and miner's tools, are included along the top and bottom border.

This map was drawn by Parker Edwards and published by the Sunnyvale Packing Company in 1951. This is the only known example.

Very good. Even overall toning. Exhibits some crackling. Blank on verso.
Looking for a high-resolution scan of this?