1851 Tallis / Rapkin Map of Afghanistan, Baluchistan, and the Punjab 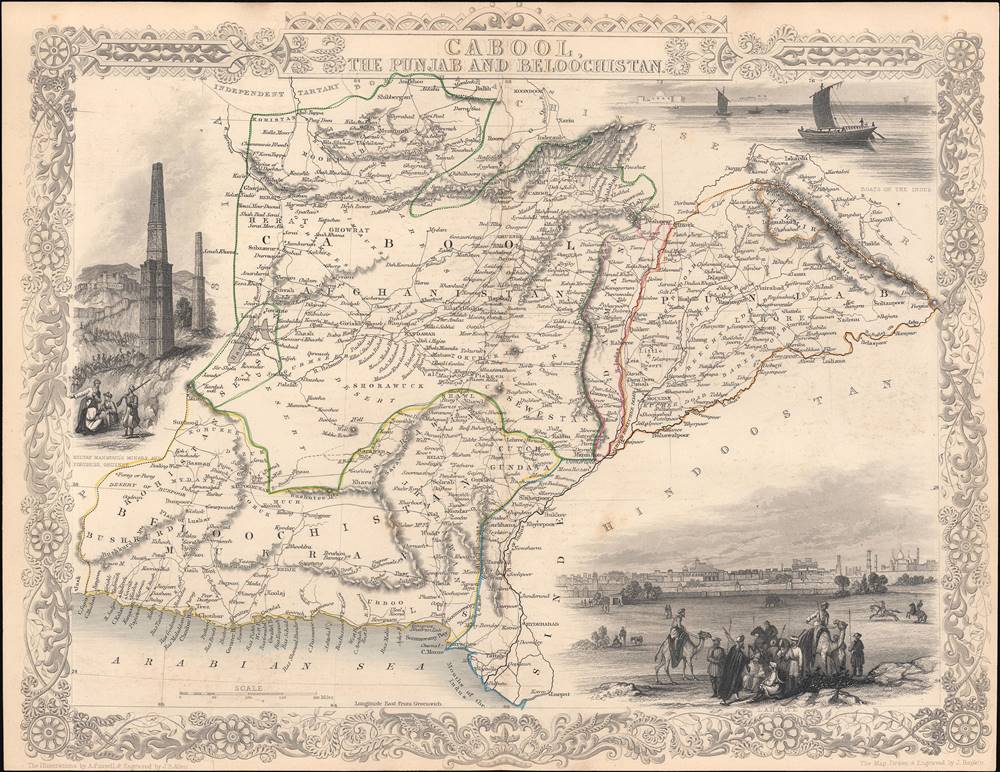 1851 Tallis / Rapkin Map of Afghanistan, Baluchistan, and the Punjab

After the embarrassing British defeat in Afghanistan.
$250.00

This is a rare 1851 John Tallis map of present-day Afghanistan and Pakistan drawn and engraved by John Rapkin for Tallis's Illustrated Atlas and Modern History of the World. A contemporary audience, particularly a British audience, would have viewed this map through the prism of the First Anglo-Afghan War (1839 - 1842), an abject disaster for the British, and the wider context of 'Great Game' imperial competition with Russia.

Features of the Map and Illustrations

This map covers an area consistent with most of present-day Afghanistan and Pakistan. Much of this territory would eventually come under direct or indirect British control. At the same time, while the British exerted a strong influence over Afghan foreign policy in the late 19th century, the Barakzai Dynasty retained its autonomy.

Among the illustrations surrounding the map is one of Ghazni (Ghuznee), showing fortifications and towers built there by Sultan Mahmud, founder of the Ghaznavids Dynasty in the late 10th century. Though little known today, Sultan Mahmud transformed Ghazni (his hometown) into a military and cultural center that arguably rivaled Baghdad. More directly relevant for this map, Ghazni was also the site of the first battle of the First Anglo-Afghan War, which was a major British victory. This oblique allusion to one of the high points of the war for the British was likely meant to put a positive spin on an otherwise catastrophic imperial adventure. Ironically, after the battle, the British destroyed some of the ancient fortifications at Ghazni referred to here.

Fought between the British East India Company and the Emirate of Afghanistan, the First Anglo-Afghan War was part of 'The Great Game,' a larger diplomatic confrontation between the British and Russian Empires. While Russia probably never seriously considered invading India, it was actively expanding into Central Asia. The British East India Company, and by extension the British Empire, nonetheless feared that the Russians would move through Central Asia, then through Afghanistan, into India, undermining British hegemony in South Asia.

To secure the Afghan frontier, the British sent an embassy to the Emir of Afghanistan, Dost Mohammad Khan, with whom they hoped to confirm an anti-Russian alliance. Although Dost Mohammad was interested in a British-Afghan alliance, the two sides had conflicting interests. Afghanistan had recently lost Peshawar, its second capital, to the powerful the Sikh Empire, with whom the British were allied. Thus, the British had to choose to ally with either Dost Mohammad or the Sikhs. They believed the Sikh Empire, which maintained a powerful French-trained standing army, the Dal Khalsa, to be the greater threat, and so took a third path.

Unable to forge an alliance with Dost Mohammad (Barakzai Dynasty), the British instead turned to the exiled former Emir Shah Shujah (Durrani Dynasty). Unlike Dost Mohammad, who was fierce, wily, and dogged, Shah Shujah had a reputation for indolence and cruelty, reportedly having a penchant for removing the noses, ears, tongues, penises, and testicles of his courtiers and slaves when they displeased him in the slightest. Nonetheless, the British considered him, for his very indolence, to be malleable and thus preferable to Dost Mohammad.

The British mustered the massive 'Grand Army of the Indus', consisting of some 21,000 British, Indian, and Sikh troops and marched into Afghanistan from Punjab under the command of Baron John Keane. By March of 1839 they crossed the 4000-meter-high Bolan Pass and seized Kandahar on April 25, 1839. Cognizant of the harsh conditions of the region, they waited until the crops ripened in mid-June to begin further conquests. Often at great cost, the British Grand Army won most major engagements, but the dogged Dost Mohammad simply retreated further into the countryside and continued to wage a persistent guerilla war against the British.

Eventually the British decided they had achieved their objective and most of the Army returned to India, leaving just 8000 troops to support the Shah Shuja puppet regime based in Kabul. When Dost Mohammed escaped from prison in Bokhara and returned to Afghanistan, the fighting again commenced. Eventually, the main British Indian and Sikh force occupying Kabul along with their camp followers was almost completely annihilated while retreating in January 1842. The defeat left a deep impression on the British public and was commemorated several decades later in several well-known paintings, including Elizabeth Thompson's Remnants of an Army.

The British sent an 'Army of Retribution' to Kabul but it achieved little and, by the end of the year, Dost Mohammad resumed his rule. The British called this war 'The Disaster in Afghanistan' and Dost Mohammad is reported to have said:

'The Great Game' was a diplomatic confrontation between the British and Russian Empires over Afghanistan and other territories in Central and Southern Asia. The conflict, rooted in long-standing animosity between Russia and Britain, revolved around Afghanistan, which, while lacking significant resources of its own, was strategically situated. For its part, Russia feared Britain was making commercial and military inroads into Central Asia, an area long within the sphere of influence of St. Petersburg. Britain, conversely, feared Russia making gains in India, 'the jewel in the crown' of British Asia. The escalating tensions led to several wars and proxy wars: The First Anglo-Afghan War (1839 - 1842), the First Anglo-Sikh War (1845 - 1846), the Second Anglo-Sikh War (1848 - 1849), and the Second Anglo-Afghan War (1878 - 1880), along with the Russian annexations of Khiva, Bukhara, and Kokand. Then as now, Afghanistan proved a grinding stone upon which the world's great empires diminished themselves, none achieving definitive victory despite committing staggering resources.

This map was part of the well-known Tallis's Illustrated Atlas and Modern History of the World published in 1851. It was drawn and engraved by John Rapkin and the vignette illustrations were drawn by A. Fussell and engraved by J.B. Allen. It is held by several libraries in North America, Great Britain, and in former territories of the British Empire.


James Baylis Allen (1803 - 1876) was a British engraver who trained under his older brother, Josiah Allen, who was also an engraver, as well as the painters John Vincent Barber and Samuel Lines. Allen was especially known for his engravings of landscapes, producing a well-known series on the rivers of France and a number of other series dealing with British, Italian, and Greek landscapes, as well as battle scenes. Many of his engravings appeared in The Art Journal, the premier art journal in 19th century Britain. Learn More...


John Tallis (November 7, 1817 - June 3, 1876) was an English map publisher and bookseller. Born in Stourbridge in Worcestershire, worked in his father's Birmingham agency from 1836 until 1842. Roughly in 1838, Tallis published a collection of London Street Views, and entered into a partnership with his brother Frederick Tallis from 1842 - 1849. Tallis and Company also published the Illustrated Atlas of the World in 1849. Also in 1849, Tallis traveled to New York City where he founded publishing agencies in six American cities. Upon returning from New York, Tallis paid his brother £10,000 for his share of the business, and operated from then on as John Tallis and Company until 1854. By 1853, John Tallis and Company had agencies in twenty-six cities in the United Kingdom, the United States, and Canada and employed over 500 people. By the end of 1853, Tallis had made the decision to share the burden of running such an extensive company and formed the London Printing and Publishing Company on February 24, 1854, becoming co-managing director with Ephraim Tipton Brain. After a series of setbacks, however, Tallis had to sell his estate and by 1861 was declared bankrupt. He was kept afloat by the kindness of friends and former employees, but none of his 'various ambitious projects' ever worked out for the rest of his life. Tallis married Jane Ball on December 6, 1836 in Birmingham, with whom he lived until her death in 1862. Tallis remarried on June 27, 1863 to Mary Stephens, with whom he had two children. Learn More...


Alexander Fussell (c. 1814 - 1881), sometimes spelled Fussel, was a British artist and illustrator best known for his drawings of birds that appeared in William Yarell's History of British Birds, though he took on a wide variety of subjects, including illustrations accompanying maps. Learn More...