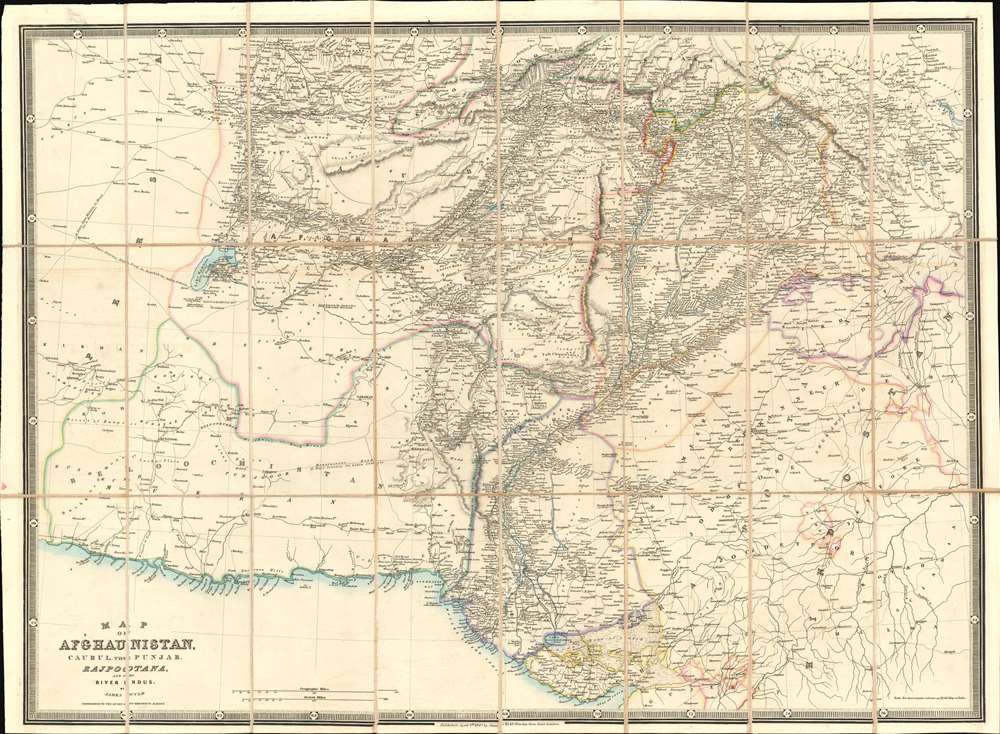 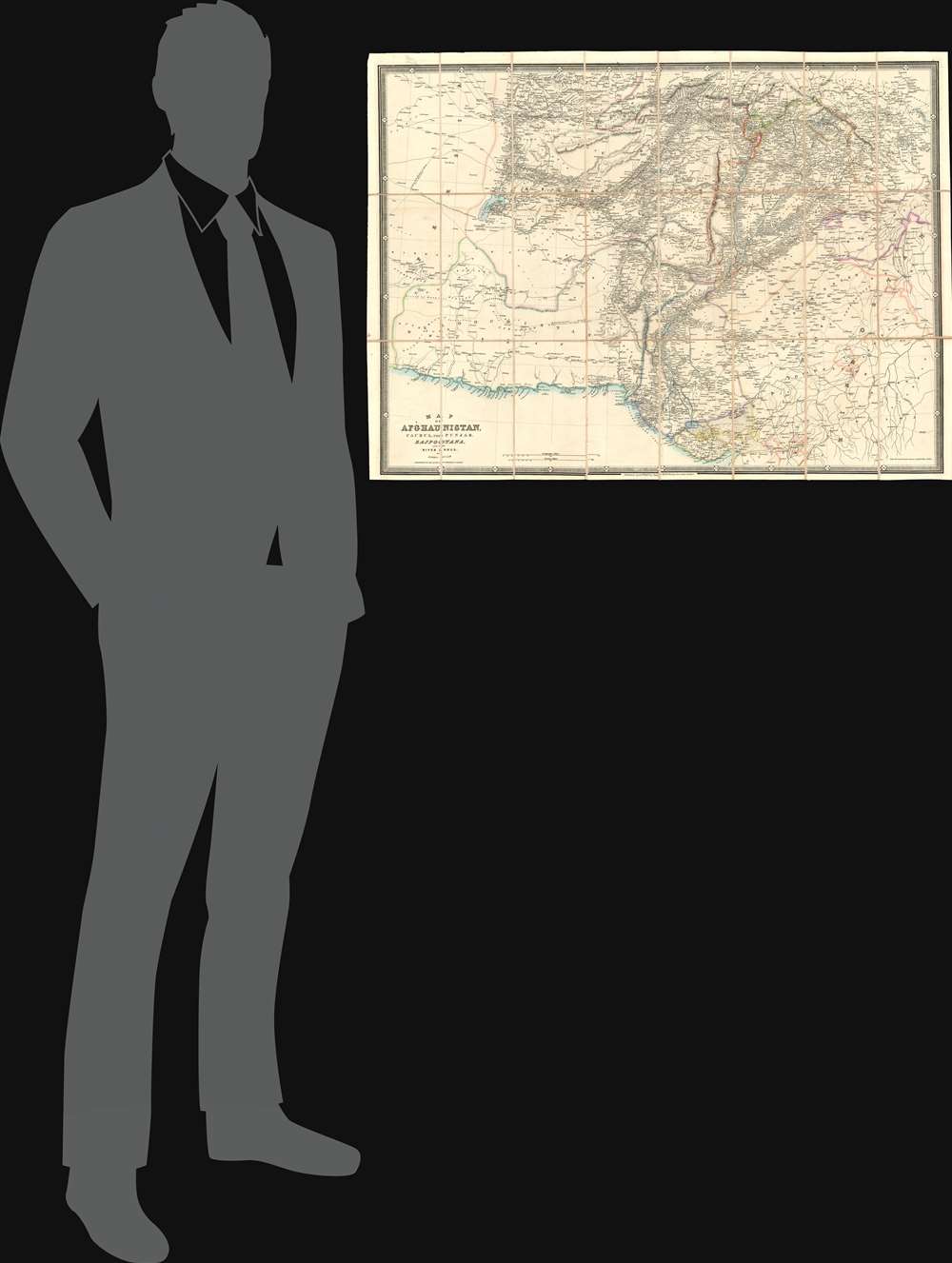 Theatre of the First Anglo-Afghan War: The Beginning of the Great Game and the scene of the Disaster in Afghanistan.
$2,000.00

This is an 1842 Wyld map of Afghanistan and its surrounds, illustrating the theatre of the First Anglo-Afghan War: the first major conflict of 'The Great Game' for British control of India. It was printed just three months after the disastrous Retreat from Kabul. Though the debacle is not specifically referred to here, the passes between Kabul and Peshawar are depicted with sufficient detail (surpassing other contemporaneous maps of the area ) that it seems clear that the map reflects the best British understanding of Afghanistan's geography at the time of the conflict. These include Gandamak - the pass approaching Jalalabad in which the massacre of Elphinstone's army took place between January 6 and January 13, 1842.

The map extends from the Gulf of Oman and the Arabian Sea northwards to Hindu Kush: it reaches from the deserts of eastern Iran and to Delhi, Agra, and Pangong Tso in the Himalayas. The whole is detailed, but the Indus River Valley and the area between that river and the Hindu Kush appear with particular granularity.

The map depicts what is now Gujarat, Rajasthan, Haryana, and Himachal Pradesh. Many cities and the roads connecting them are clearly marked, with hand color delineating the borders between the provinces. Among many others, the cities of Delhi, Agra, Jaisalmer, Jodhpur, Ahmedabad, and Bikaner are named.

The geographical spread of what the British refer to as The Disaster in Afghanistan can be found here. All the major cities where actions occurred are identified, with the roads connecting them well detailed. Quetta, Kandahar, Ghazni, Qalat, Kabul and Jalalabad all appear along with the neighboring villages, passes, and roads. Though the scope is larger than the contemporaneous SDUK maps of Afghanistan, the detail is far sharper and undoubtedly reflects details that were derived from the military action taking place in 1839 and 1840.

Northwest of Delhi, the modern regions of Punjab and Chandigarh are named 'Sikh States'. This was the Sikh Empire, who until 1837 had been at war with the Emirate of Afghanistan.

The western portion of the map - marked as Persia, and Beloochistan further to the south - depicts the desert regions of eastern Iran. As with most large desert regions in the 19th century, there is little fine detail here: but routes off the map are labeled ('18 days from Kirman to Herat for a horseman'... '36 days journey from Yezd to Doosha for laden camels.' 'Mountainous road 13 days for laden camels'.

Fought between the British East India Company and the Emirate of Afghanistan, the First Anglo Afghan War was part of 'The Great Game,' a larger diplomatic confrontation between the British and Russian Empires. While Russia probably never seriously considered invading India, it was actively expanding into Central Asia. The British East India Company, and by extension the British Empire, nonetheless feared that the Russians would move through their central Asian provinces, then through Afghanistan, into India, undermining British hegemony in South Asia.

In order to secure the Afghan frontier, the British sent an embassy to the Emir of Afghanistan, Dost Mohammad Khan, with whom they hoped to confirm an anti-Russian alliance. Although Dost Mohammad was interested in a British-Afghan alliance, both sides had conflicting interests. Afghanistan had recently lost Peshawar, its second capital, to the powerful the Sikh Empire, with whom the British were allied. Thus, the British had to choose to ally with either the Afghan, Dost Mohammad, or the Sikhs. They believed the Sikh Empire, which maintained a powerful French-trained standing army, the Dal Khalsa, to be the greater threat, and so took a third path.

The British mustered the massive 'Grand Army of the Indus', consisting of some 21,000 British, Indian, and Sikh troops and marched into Afghanistan from Punjab under the command of Baron John Keane. By March of 1839 they crossed the 4000-meter-high Bolan Pass and seized Kandahar on April 25, 1839. Cognizant of the harsh conditions of the region, they waited until the crops ripened in mid-June to begin further conquests. It was probably around this time that survey work for the present meticulously detailed map was completed. Often at great cost, the British Grand Army won most major engagements, but the dogged Dost Mohammad simply retreated further into the countryside and continued to wage a persistent guerilla war against the British.

Eventually the British decided they had achieved their objective and most of the Army returned to India, leaving just 8000 troops to support the Shah Shuja puppet regime. When Dost Mohammed escaped from prison in Bokhara and returned to Afghanistan the fighting again commenced. Eventually the main British Indian and Sikh force occupying Kabul along with their camp followers was almost completely annihilated while retreating in January 1842. The British sent an 'Army of Retribution' to Kabul but, by the end of the year, Dost Mohammad resumed his rule. The British called this war 'The Disaster in Afghanistan' and Dost Mohammad is reported to have said:

. The First Anglo-Afghan was the opening salvo of the Great Game, which, one might argue, is still being fought over control of Afghanistan.

'The Great Game' was a diplomatic confrontation between the British and Russian Empires over Afghanistan and other territories in Central and Southern Asia. The conflict, rooted in long-standing animosity between Russia and Britain, revolved around Afghanistan, which, while lacking significant resources of its own, was strategically situated. For its part, Russia feared Britain was making commercial and military inroads into Central Asia, an area long within the sphere of influence of St. Petersburg. Britain, conversely, feared Russia making gains in India, 'the jewel in the crown' of British Asia. The escalating tensions led to several wars and proxy wars: The First Anglo-Afghan War (1839 - 1842), the First Anglo-Sikh War (1845 - 1846), the Second Anglo-Sikh War (1848 - 1849), and the Second Anglo-Afghan War (1878 - 1880), along with the Russian annexations of Khiva, Bukhara, and Kokand. Then as now, Afghanistan proved a grinding stone upon which the world's great empires diminished themselves, none achieving a definitive victory despite committing staggering resources. The Great Game 'ended' on September 10, 1895, with the signing of the Pamir Boundary Commission Protocols, which stabilized the border between Afghanistan and the Russian Empire - but well into the 20th century the British were well aware the conflict remained. Regarding the attitude of Afghans to the British and to the Russians, the general assumption of the British was that 'Some will fight for us, some against us, but all will fight.'

Excellent condition. Dissected and mounted on linen for folding, as issued. Original covers removed but present.