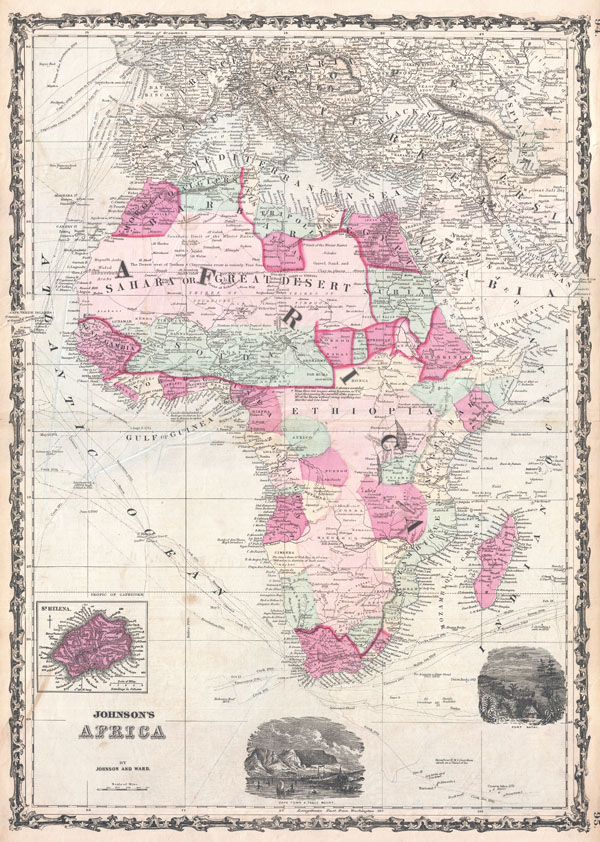 A extraordinary and attractive example of Johnson's 1862 map of Africa. This rare map appeared only in the earliest editions of Johnson's Atlas. Includes all of Africa as well as adjacent parts of Europe and Asia. Color coded according to Mexican states . This exceptional maps was designed during the great age of African exploration in the mid 19th century. Shows Lake Victoria (alternately called Lake Nyanza or Ukerewe Sea) in an embryonic state. Marks the route of Dr. Livingstone along the Zambezi River. Also offers notations regarding several other important explorations such as that of Mahamet Ali, Denham & Clapperton, Barth, Lander, and others. Includes many interesting comments and notes such as this one

In 1841.2 W. Arnaud & Sabatier ascended White River 500 leagues above Kartoum to 4'42' N. Lat. thus passing the parallel of the supposed Mts. of the Moon without seeing anything but Marshes and Low Land.

Names numerous tribes and caravan routes throughout. Surrounding watery areas show the routes taken by numerous sailing expeditions sailing around the Cape, including Cook, Carteret, Wallis, the Resolution, Byron, Vasco de Gama, Vancouver, and others. An inset details the remote island of St. Helena, famed as Napoleon's place of exile and death. Lower right hand quadrant features two attractive vignettes depicting Cape Town and Table Mountain and Port Natal. Features the strapwork style border common to Johnson's atlas work from 1860 to 1863. Published by A. J. Johnson and Ward as plate number 65 in the 1862 edition of Johnson's New Illustrated Family Atlas. This is the first edition of the Family Atlas to bear the Johnson and Ward imprint.