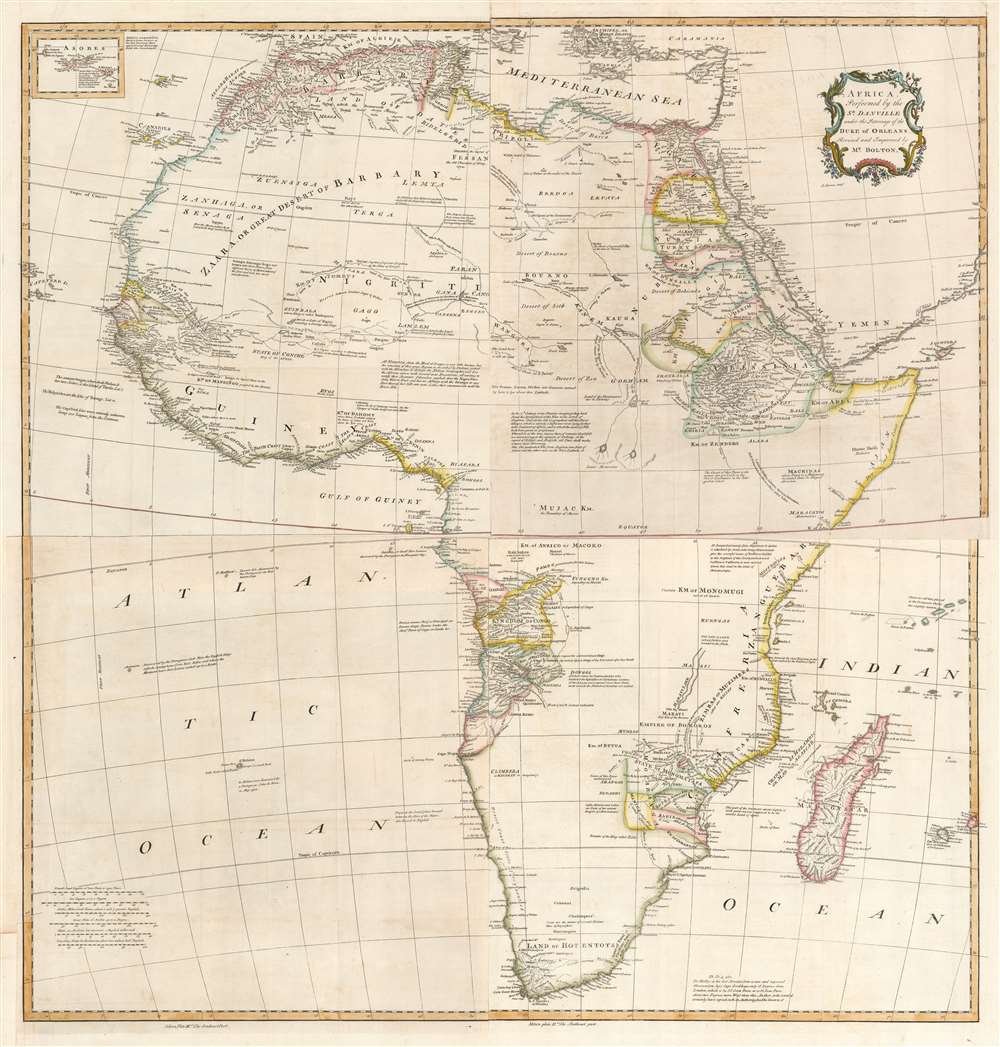 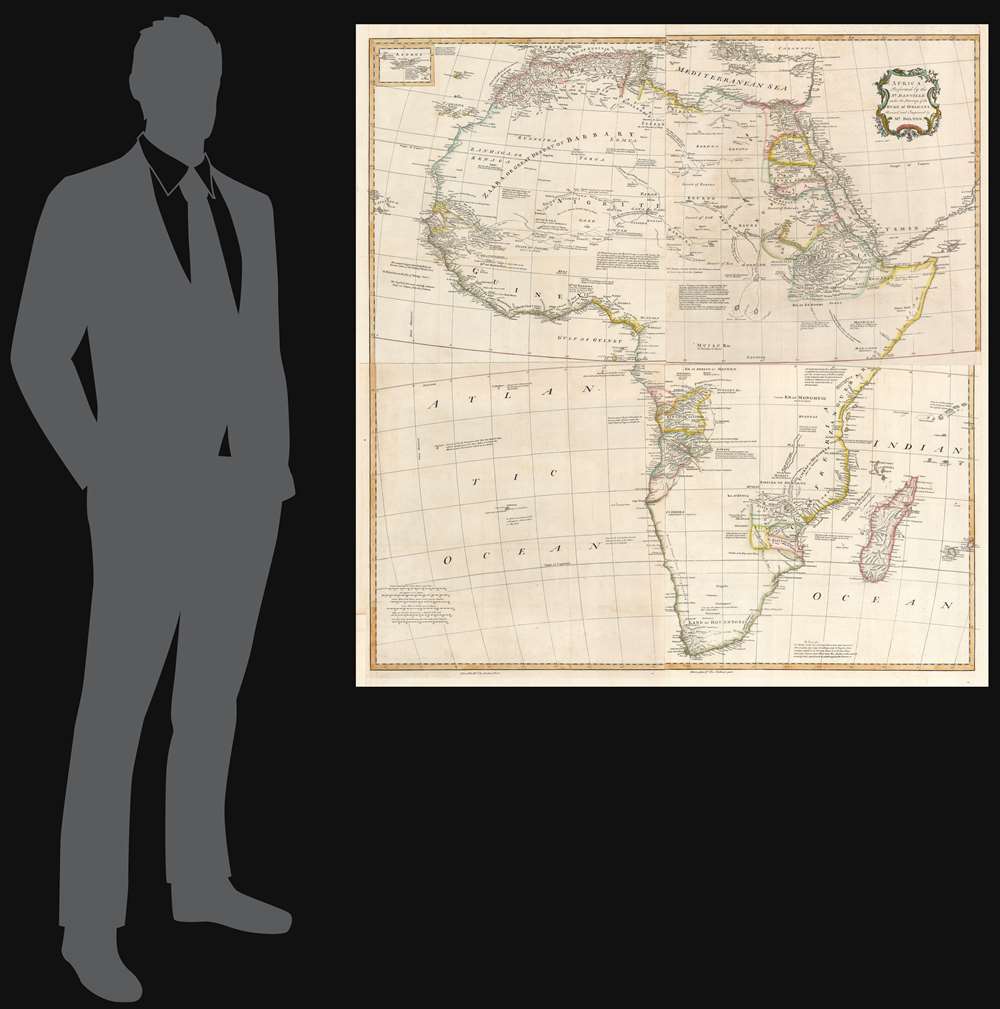 This large and evocative four-sheet 1755 wall map of Africa captures a transitional period in European understanding of African geography. It was bound, in its four separate sheets, in the second volume of Malachy Postlethwayte's The Universal Dictionary of Trade and Commerce. The map is the work of Solomon Boulton, who drafted the map as a largely faithful translation of the illustrious French cartographer Jean-Baptiste Bourguignon d’Anville's 1749 map of the continent. D'Anville was an extremely careful mapmaker, meticulous in detail and scrupulous in the data presented in his work, and for the most part Boulton preserves these qualities while translating the original text and adding an attractive rococo cartouche.

D'Anville's map presents state-of-the-art cartography for many Africa's coastal kingdoms, and while he does not eliminate many of the erroneous depictions of the interior, he makes strides towards downplaying them. For example, although he includes the imaginary 'Mountains of Kong' and Ptolemy's 'Mountains of the Moon', these features are presented much less boldly than on earlier maps, indicating D'Anville's uncertainty. Vast areas are left blank to indicate clearly European ignorance of the interior. Nevertheless, there is still a wealth of detail, derived from Arab, colonial, missionary, and exploratory penetrations of the continent. The best-mapped parts are found on the Mediterranean Coast, Morocco, the Senegambia, the Congo, South Africa, the Kingdom of Monomatapa, Abyssinia, and Egypt. Morocco, Egypt, and the southern Mediterranean Coast (Barbary), were well known to Europeans since antiquity and D'Anville's accurate mapping of these regions reflects continual exchange. Further south, the colonial enclaves along the Niger River (Senegal and Gambia), the Congo River, and South Africa reflect considerable detail associated with European penetration by traders and missionaries. The land of Monomatapa around the Zambezi River was explored early in the 16th century by the Portuguese in hopes that the legendary gold mines supposedly found there would counterbalance the wealth flowing into Spain from the New Word. Unfortunately, these mines were mostly tapped out by the 15th century.

A proto-Lake Nyassa or Lake Malawi, here identified as Maravi, appears in a long thin embryonic state that suggests accuracy, although the lake had not been conclusively discovered by Europeans, and would not be until Portuguese trader Candido Jose da Costa Cardoso stumbled upon it in 1849 - one hundred years following D'Anville's presentation of the lake here. D'Anville's inclusion of Lake Malawi is most likely a prescient interpretation of indigenous reports brought to Europe by 17th century Portuguese traders. Its form would be followed by subsequent cartographers well into the mid-19th century when the explorations of John Hanning Speke, David Livingstone, Richard Francis Burton, and others would at last yield a semi-detailed study of Africa's interior.

The map does include notations that do not appear on D'Anville's map. These are likely additions by Postlethwayte himself as editor and author of the volume in which the map appeared. Some of the new annotations pertain to classical or mythological elements neglected in modern cartography (for example the assertions that The ancient Gorgon, where dwelt Medusa and her two Sisters, is the Island of Farulo, Lat. 7. and, in eastern Central Africa, that this part of the Continent about Sofala is with great reason supposed to be the antient Land of Ophir (this latter, the fabled Biblical source of the gold King Solomon used to decorate The Temple).

Boulton's map also includes and cites elements from recent English travels. Halley's astronomical measurements fixing the longitude of the Cape of Good Hope are also noted, placing it 'about two Degrees more West than this Author, who would certainly have copied such an Authority, had he known it.' The location of Abomy, 'where the K. Of Dahomy resides' is not included on D'Anville's map. Boulton here cites the Voyages of Smith, Snelgrave, and Atkins, which is telling: Snelgrave's 1734 A New Account of Some Parts of Guinea and the Slave Trade, Atkins' 1735 A Voyage to Guinea, Brazil, and the West-Indies, and Smith's 1744A New Voyage to Guinea were essential early travels describing the workings of the Atlantic Slave Trade, of which Postlethwayte was an enthusiastic supporter.

This map was engraved by Emanuel Bowen after Boulton's translation of the D'Anville. It was first printed for inclusion in Postlethwayte's 1755 Dictionary of Commerce. Only three examples of the 1755 map are catalogued in OCLC, appearing at Yale, Boston College, and the University of Cape Town. Postlethwayte's The Universal Dictionary of Trade and Commerce is well represented in institutional collections.