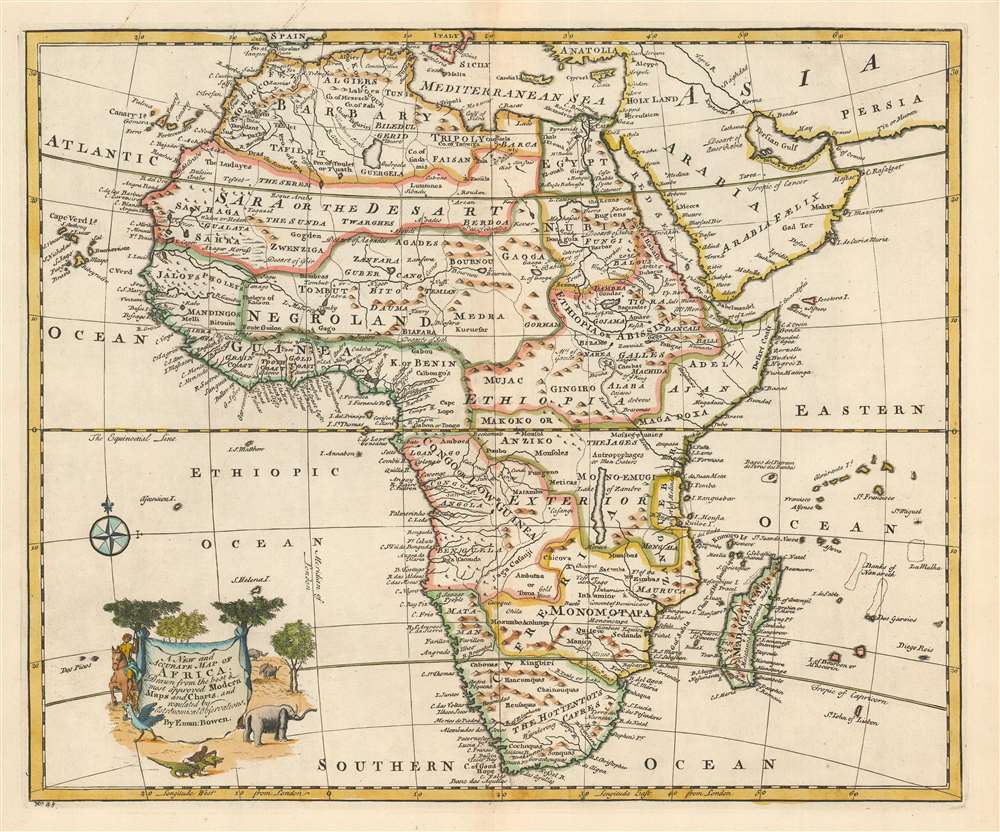 A most modern map...

This is an extremely attractive 1747 decorative map of Africa by the English cartographer Emmanuel Bowen. It depicts the African continent in stunning detail with numerous notations and comments regarding the people, geography, and wildlife of the region.

This map offers significant detail throughout the interior naming numerous tribal areas and kingdoms including the Jages, the Anziko, the Mono-Emugi, Monomotapa, Gaoga, Gingiro, and others. The Kingdom of Gingiro is known from the reports of the Jesuit Anton-Fernandez who traveled to the region in 1613 on a mission for King Philip II of Spain. Anton-Fernandez offer a wealth of detail about the Kingdom, noting that Gingiro means 'monkey' in the local language and that the king himself a kind of monkey-God. Over a hundred years later, when Bowen drew this map, Anton-Fernandez's journal remained one of the few reports of this region available and, for want more up to date information, was incorporated. Most other regions of Africa rely on equal vagarious references.

One the Map: Abyssinia

The upper quadrants of this map are dedicated to a rather interesting depiction of northeastern Africa from the Mediterranean shores to the Horn. Abyssinia (modern day Ethiopia) was mapped in detail by early Italian missionaries and of considerable interest to Europeans first, because it was (and is) predominantly Christian; second, because it was a powerful, well-organized and unified kingdom; and third because the sources of the Blue Nile were to be found here. Bowen correctly notes the course of the Blue Nile placing its source at Lake Tana, (here Dambea) in modern day Ethiopia.

In the southern half of Africa two large Empires are named, Monoemugi and Monomotapa. This is the great southern African gold mining region and these names are likely taken from the names of prominent Congolese tribal rulers. The location of the gold mines is also noted. Monomotapa is particularly interesting as many considered this area to be the Biblical land of Ophir, where one could discover the mines of King Solomon.

Just north of Monomotapa, Lake Malawi, here identified as Lake of Zambre, appears in a long thin embryonic state that, though it had not yet been 'discovered,' is remarkably accurate to form. Lake Malawi was not officially discovered until Portuguese trader Candido Jose da Costa Cardoso stumbled upon it in 1849 - one hundred years following Bowen's presentation of the lake here. Bowen's inclusion of Lake Malawi is most likely a prescient interpretation of indigenous reports brought to Europe by 17th century Portuguese traders. Its form would be followed by subsequent cartographers well into the mid-19th century when the explorations of John Hanning Speke, David Livingstone, Richard Francis Burton and others would at last yield a detailed study of Africa's interior.<

A beautiful title cartouche illustrating various animals adorns the lower left quadrant. This map was prepared by Emanuel Bowen as plate no. 45 for the 1747 issue of A Complete System of Geography. Increasingly uncommon on the market.